Poetry A-Z: W is for Warm-Blooded

Since my son's name starts with the letter W, I let him pick today's adjective from a long list. Included were words like wacky, wild, wet, and winged. Since he's crazy for animals, he chose warm-blooded.

Now, this word could go in many directions, but for today I'm focusing on warmblooded creatures of the domestic type. Settle in, because this could be a long one! There are so many wonderful books here that today you'll get some brief annotations and a few poems.


WARMBLOODED -  relating to or denoting animals (chiefly mammals and birds) that maintain a constant body temperature, typically above that of the surroundings, by metabolic means; homeothermic.

Part 1 - Dogs
"Dogs are better than human beings because they know but do not tell." --Emily Dickinson 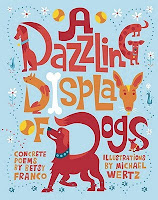 A Dazzling Display of Dogs, written by Betsy Franco and illustrated by Michael Wertz, is a series of 34 concrete poems that illustrate a variety of dogs in a range of situations doing things like riding in the car, escaping from home, chasing their tails, and more. (Here's a little tip, you'll see this one again tomorrow!)


Diamond Willow, written by Helen Frost, is a verse novel told in a series of diamond-shaped poems. The story follows Diamond Willow, a young girl living in the Alaska wilderness who convinces her parents to let her take their sled dogs to her grandparents' house. Along the way tragedy strikes and Willow must do whatever she can to help her dog Roxy survive. 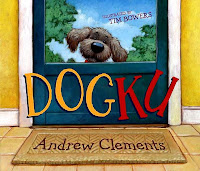 Dogku, written by Andrew Clements and illustrated by Tim Bowers, is the story of a stray dog told through a series of 17 haiku.

Good Dog, written by Maya Gottfried and illustrated by Robert Rahway Zakanitch, is a collection of free verse poems in which 16 breeds express their  personalities.

I Didn't Do It, written by Patricia Maclachlan and Emily Maclachlan Charest and illustrated by Katy Schneider, is the follow-up to ONCE I ATE A PIE. In it a group of adorable puppies describe what they do and see. 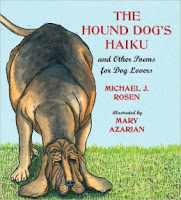 The Hound Dog's Haiku: and Other Poems for Dog Lovers, written by Michael J. Rosen and illustrated by Mary Azarian, introduces readers to 20 breeds of dog from bluetick coonhound to dachshund. Back matter includes information about the breeds.

It's About Dogs, written by Tony Johnston and illustrated by Ted Rand, is a collection of more than 40 poems that pay tribute to man's best friend.

Little Dog and Duncan, written by Kristine O'Connell George and illustrated by June Otani, is the follow-up to LITTLE DOG in which a very large dog named Duncan comes to visit little dog. 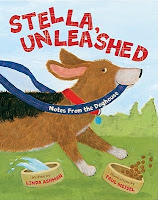 Once I Ate a Pie, written by Patricia Maclachlan and Emily Maclachlan Charest and illustrated by Katy Schneider, is a collection of poems in which dogs of all types tell us how they see the world.


Stella, Unleashed: Notes From the Doghouse, written by Linda Ashman and illustrated by Paul Meisel, is a book of poems told from Stella's point of view. They cover topics as varied as her rescue from the pound, selecting a name, the family members, other pets, eating, sleeping, the dog park, and more.

The World According to Dog: Poems and Teen Voices, written by Joyce Sidman with photographs by Doug Mindell, contains poems in a variety of forms that explore the world of the dog. Interspersed throughout are essays about dogs written by teens.

Here's one of my favorite dog poems from STELLA UNLEASHED.

Vanilla is delicious, yes.
But could I ask a favor?
Next time we're at the ice-cream store,
let's try the liver flavor.

Part 2 - Cats
"In ancient times cats were worshipped as gods; they have not forgotten this." --Terry Pratchett 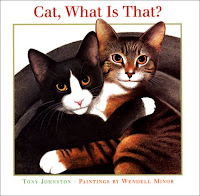 
Cat, What Is That?, written by Tony Johnston and illustrated by Wendell Minor - The poet answers the question posed in the title, never using the word cat, but by describing their antics and behaviors.

Cats Vanish Slowly, written by Ruth Tiller and illustrated by Laura Seeley - This collection of 12 poems introduces readers to the cats at grandmother's farm, each one with a personality of its own. 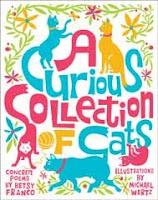 A Curious Collection of Cats, written by Betsy Franco and illustrated by Michael Wertz - This collection of 34 concrete poems describes in words and form a variety of cats, including fat cats, princess cats, kissy cats, and more. I particularly like the poems focused on cat anatomy, like their tails and tongues. (Here's a little tip, you'll see this one again tomorrow!)

I Am the Cat, written by Alice Schertle and illustrated by Mark Buehner - Alternating between haiku and longer poems, this collection captures the essence of the cat in all it's complexity.

Old Possum's Book of Practical Cats, written by T.S. Eliot and illustrated by Edward Gorey - Forget everything you've heard about the musical and read the book! Eliot included these poems in letters to his godchildren. Though written in the 1930s, they ever get old. 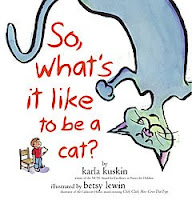 So, What's It Like to Be a Cat?, written by Karla Kuskin and illustrated by Betsy Lewin - The poems in the book make up a "conversation" (perhaps interview is a better word) between a young boy and his cat.

Won Ton: A Cat Tale Told in Haiku, written by Lee Wardlaw and illustrated by Eugene Yelchin - This is the story of a shelter cat and how he acclimates in his new home, told entirely in senryu, a form focused on “the foibles of human nature--or in this case, cat nature.” Whether you call it haiku or senryu, the short verses are entirely fitting for the tale Wardlaw tells.

Here's one of my favorite cat poems. It is from the ALL THE SMALL POEMS AND FOURTEEN MORE by Valerie Worth.

cat
by Valerie Worth

The spotted cat hops
Up to a white radiator-cover
As warm as summer, and there,

Between pots of green leaves growing,
By a window of cold panes showing
Silver of snow thin across the grass,

She settles slight neat muscles
Smoothly down within
Her comfortable fur,

Slips in the ends, front paws,
Tail, until she is readied,
Arranges, shaped for sleep.

"If a dog jumps in your lap, it is because he is fond of you; but if a cat does the same thing, it is because your lap is warmer." -- Alfred North Whitehead 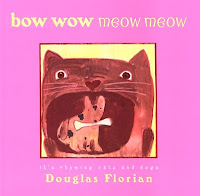 Bow Wow Meow Meow: It's Rhyming Cats and Dogs, written and illustrated by Douglas Florian - In this collection, Florian presents a series of 21 poems about domesticated and wild dogs and cats.

Raining Cats and Dogs, written by Jane Yolen and illustrated by, is a collection of poems that can be read from both directions. Tired of poems about dogs? Flip the book over and read about cats. (This one's out of print, so check your local library for a copy. You can also find copies online.)


Let's close today with two acrostic poems from the book A Kick in the Head: An Everyday Guide to Poetic Forms, selected by Paul Janeczko and illustrated by Chris Raschka.
Yup, I'm a dog lover!

That's it for W. See you tomorrow with some V inspired poetry ponderings.
Posted by Tricia at 12:01 AM