Poetry in the Classroom - Math and Poetry

I thought that at least once a week during this trek through April it might be helpful if I put together a thematic list of poetry titles. Since math and poetry are two of my favorite things, this seems like a great place to start. 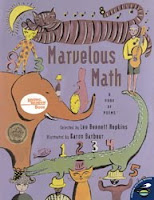 Peachy Keen
For Paul Cezanne, still lifes would do,
A cloth, a vase and peaches, too.
His planes of color, pure and bright,
So smartly capture form and light.
Can you make 10 with bowls of fruit?
Find all 5 ways if you're astute!

I wouldn't think of teaching basic math concepts without copies of Where The Sidewalk Ends and A Light in the Attic by Shel Silverstein. Some of my favorite math-related poems are:
I also have a couple of teacher resource books on using poetry to teach math. These titles are well worth the investment.
Here are some additional resources for thinking about math and poetry.
Finally, here are some poems I use each semester when I introduce the subject of the teaching of math to future teachers. I generally begin by sharing some mathematically-inclined poems, including Sandburg's "Arithmetic" (I actually show a video ), Numbers by Mary Cornish, "Take a Number" by Mary O'Neill, and this little gem by Patricia Hubbell.

Pi r squared is forty-two,
Diameter is three,
Two and two add up to four,
(Do you love me?)
X and Y equations,
Add the number two,
Twelve and twelve are twenty-four,
(I love you.)

That's it for now. Do you have a favorite mathematically-inclined poem or a book of mathematical poetry? If so, please share!
Posted by Tricia at 4:22 PM