Christmas is over, but Hanukkah is still going strong. The new year is just around the corner. I'd like to write about endings and beginnings, so a form written from two perspectives sounds like a good idea.


The somonka is a Japanese form that consists of two tanka written in tandem. The first tanka is usually a declaration of love, with the second a response to that declaration. While this form usually requires two authors, it is possible for one poet to write from both perspectives.


Writing somonka requires that we revisit the guidelines for tanka. Tanka is a form of Japanese poetry that has been practiced for more than 1000 years. Tanka are composed of 31 syllables in a 5/7/5/7/7 format. Most tanka focus on nature, seasons, the discussion of strong emotions, or a single event of some significance.

In her article Tanka as Diary, Amelia Fielden writes:

Tanka, meaning ‘short song’, is a 1300 year old Japanese form of lyric poetry. Non-rhyming, it is composed in Japanese in five phrases of 5/7/5/7/7 syllables.

In English, tanka are normally written in five lines, also without (contrived) rhyme, but in a flexible short/long/short/long/long rhythm. Due to dissimilarities between the two languages, it is preferable not to apply the thirty-one syllable standard of the Japanese poems, to tanka in English. Around twenty-one plus/minus syllables in English produces an approximate equivalent of the essentially fragmentary tanka form, and its lightness. To achieve a “perfect twenty-one”, one could write five lines in 3/5/3/5/5 syllables. If the resulting tanka sounds natural, then that’s fine. However, the syllable counting does not need to be so rigid. Though no line should be longer than seven syllables, and one should try to maintain the short/long/short/long/long rhythm, variations such as 2/4/3/5/5 or 4/6/3/6/7 or 3/6/4/5/6 syllable patterns can all make good tanka.

Here is an example, translated by one of my former colleagues at the University of Richmond. These tanka were sent back and forth between a nobleman named Mikata No Sami (Active C. 700) and his young wife, the daughter of Omi Ikuha (N.D.)

Tied up, it loosens,
untied, it's too long
my love's hair --
nowadays I can't see it --
has she combed it together?

Translated by Stephen Addiss in The Art of Haiku: Its History through Poems and Paintings by Japanese Masters (pp. 19-20)

I hope you'll join me this week in writing a somonka. Please share a link to your poem or the poem itself in the comments.
Posted by Tricia at 1:13 PM 4 comments:

Since we wrote a sonnet variation last week, I thought I continue with this theme. In Avis Harley's book Fly With Poetry: An ABC of Poetry, she include the bite-sized sonnet. This form follows the rhyme scheme of a "traditional sonnet," but it's not written in iambic pentameter. Instead, each line contains only ONE syllable. Here's Avis' poem.

I hope you'll join me this week in writing a bite-sized sonnet. Please share a link to your poem or the poem itself in the comments.
Posted by Tricia at 3:45 PM 6 comments:

Sorry I missed you all last week. I got caught up in the end of the semester and it was Friday before I realized I hadn't scheduled a post for writing. Mea culpa. I am back and have a number of stretches ready to go to see us into the New Year.

The curtal sonnet (or curtailed sonnet) was invented by Gerard Manley Hopkins. The poem Pied Beauty is a fine example of this form.

Glory be to God for dappled things—
For skies of couple-colour as a brinded cow;
For rose-moles all in stipple upon trout that swim;
Fresh-firecoal chestnut-falls; finches' wings;
Landscape plotted and pieced—fold, fallow, and plough;
And áll trádes, their gear and tackle and trim.

The curtal sonnet is composed of a sestet and a quintet. It is written in iambic pentameter, with the exception of the final line, which is a spondee (a foot consisting of two long (or stressed) syllables). The rhyme scheme is:

You can read more about this form at The Curtal Sonnets of Gerard Manley Hopkins.

I hope you'll join me this week in writing a curtal sonnet. Please share a link to your poem or the poem itself in the comments.

And so, another year of writing poetry with my fabulous sisters comes to an end. This year we alternated poetic forms with ekphrastic poems. This time around Andi shared photos taken at the Glencairn Museum Cloister. This is the photo I chose. 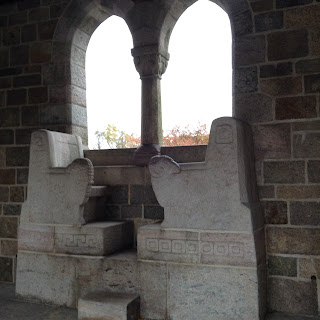 I've never written a love poem before, as I'm not really the romantic type, but I am sentimental. Here's where this image took me.


You can read the poems written by my Poetry Seven compatriots at the links below.
I do hope you'll take some time to check out all the wonderful poetic things being shared and collected today by Bridget Magee at wee words for wee ones. Happy poetry Friday friends!
Posted by Tricia at 12:01 AM 12 comments: