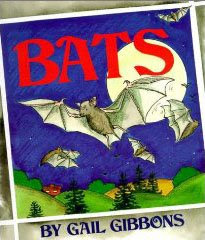 With Halloween approaching, I thought this would be a good time to share one of my favorite nonfiction books about our flying mammal friends. Bats, written and illustrated by Gail Gibbons, is a clear, concise and highly readable introduction to these often maligned animals. Readers will learn about different species of bats, their physical characteristics, behavior, adaptations, and the important role they play in the environment.

The book opens with a spread that shows bats flying against the backdrop of a night sky. The text reads:

Bats dive, swoop and swerve through the dark night sky. These creatures are nocturnal, meaning they are awake at night and asleep during the day. Most people have never seen a bat.

All the pages that follow are set against this same nighttime scene, emphasizing the nocturnal nature of bats.

The very next page shows a witch stirring a cauldron while a ghosts and bats hang in the sky overhead. The text goes on to tell readers about the roles bats have played in stories and describes a few of the myths about them. The facing page shows a bat in flight with text that reads:

Because many unkind things have been said about bats, some people still think they are scary. Actually, bats are shy and gentle animals.

From here readers learn basic bat facts, including that they are mammals, warm-blooded, give birth to live young, and are the only true flying mammals. Three pages explore the anatomy of a bat, with one double-page spread providing a close-up view of a bat's wings. This is very interesting stuff. For example, did you know that bats can "move each finger separately to change the shape of its wings?"

After learning a bit about bat flight and how they flip upside-down when they land, readers learn about roosts and the many places groups of bats live and sometimes hibernate today. More than 1000 species of bats live on every continent except Antarctica. Readers meet several different kinds of bats throughout the pages of the book.

The section of the book that describes what bats eat begins with an introduction to echolocation and how this skill helps bats to find food. While many bats eat insects, some eat fruit and nectar, a few eat meat, like fish, frogs, and mice, and one species survives on the blood of other animals. One page in the book is devoted to the vampire bat, providing a close-up view of its face, as well as an illustration of how the bat feeds. The text reads:

When the vampire bat finds an animal it makes a tiny cut with its teeth in the animal's skin. Then the bat laps up the blood with its tongue. The animal hardly feels the cut.

The facing page includes an illustration of a vampire, surrounded by flying bats. The text explains the connection between bats and stories about vampires.

One of the most interesting series of illustrations in the book shows how very different bats can look. Four species are shown with a focus on their faces. One face has a leaf-like shape on its face, another has a nose with tube-shaped nostrils, and another with a snout like a dog.

This is one of my favorite books about bats. It is an appealing, informative and highly engaging read. Don't miss it, especially at this time of year.

This post was written for Nonfiction Monday. Head on over to Anastasia Suen’s blog and check out all the great posts highlighting nonfiction this week.

For some other ideas for bat-themed books and units of study, check out these links.
Posted by Tricia at 12:05 AM