Blast Off! Poems About Space (1995), compiled by Lee Bennett Hopkins and illustrated by Melissa Sweet, is an easy to read anthology containing 20 poems by various poets, including Jane Yolen, Bobbi Katz, J. Patrick Lewis, Ashley Bryan, Lee Bennett Hopkins and others. Since this book is in an easy-reader format, the poems are accessible for young children.

When I'm An Astronaut
by Bobbi Katz

First I'll get into my spacesuit.
Then I'll bravely wave good-bye.
Next I'll climb into my spacecraft
Built to sail right through the sky!
In command inside the capsule,
I will talk to ground control.
When we've checked out
all the systems, 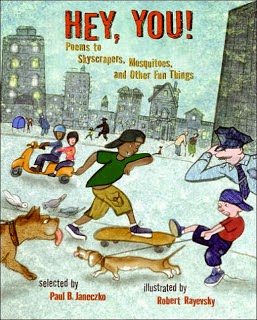 Hey You!: Poems to Skyscrapers, Mosquitoes, and Other Fun Things (2007), selected by Paul B. Janeczko and illustrated by Robert Rayesky, is an anthology entirely filled with poems of address.
Here are two examples.

And you see the little Earth
Beyond,
Do you miss its windy sound? 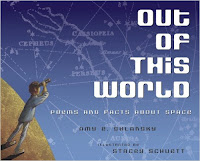 
Out of This World: Poems and Facts about Space (2012), written by Amy Sklansky and illustrated by Stacy Schuett, is a collection of poems about space and space exploration. Readers will also find explanations and fun facts in the margins.

No astronaut
is ever caught
without a suit in space

The temperatures,
extreme for sure,
make it a hostile place.

Lack of air
to breathe out there
means oxygen is key.

The suit deflects
as it protects
from any injury.

Good work is done
in shade or sun,
though movement does lack grade. 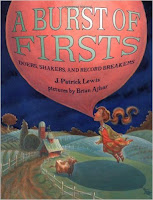 No astronaut
is ever caught
without a suit in space
Poem © Amy Sklansky, 2012. All rights reserved.

A Burst of Firsts: Doers, Shakers, and Record Breakers (2001), written by J. Patrick Lewis and illustrated by Brian Ajhar, is a collection of 22 poems about men and women who dared something special and accomplished it first.

First Men on the Moon
by J. Patrick Lewis

That afternoon in mid-July,
Two pilgrims watched from distant space
The moon ballooning in the sky.
They rose to meet it face-to-face.

Their spidery spaceship, Eagle, dropped
Down gently on the lunar sand.
And when the module's engines stopped,
Rapt silence fell across the land.

The first man down the ladder, Neil,
Spoke words that we remember now—
“One small step...” It made us feel
As if we were there too, somehow.

When Neil planted the flag and Buzz
Collected lunar rocks and dust,
They hopped like kangaroos because
Of gravity. Or wanderlust?

A quarter million miles away,
One small blue planet watched in awe.
And no one who was there that day
Will soon forget the sight they saw.

Skywriting: Poems to Fly (2010), written by J. Patrick Lewis and illustrated by Laszlo Kubinyi, is a collection of 13 poems that trace the history of our obsession with flight, beginning with the myth of Icarus and ending with the space shuttle.

I am the behemoth of adventure,
I am the shuttle of Uncle Sam's,
I run like thirty-nine locomotives,
Or twenty-three revved-up Hoover Dams.

I carry people who like to walk
Three hundred miles off the ground
I am your front-row ticket to
Celestial theater in the round.

What's it like to live in space? Here's what Scott Kelly, the only NASA astronaut to spend a continuous year in Low Earth Orbit, had to say about his time on the International Space Station.
That's it for today. I hope you'll join me tomorrow for our next celebration.
Posted by Tricia at 12:01 AM