The Straight Poop on Who Pooped in Central Park?

Way back in 2009 I wrote a post entitled Low-Brow Topics That Make For High-Brow Reading. Here's how it began.

On Tuesday I finally threw up my hands in frustration over the proliferation of "boys don't read" articles in the last few months. Here's an excerpt from the post entitled More Boy Bashing - Here We Go Again.

Can we please give boys and young men just a bit of credit for their reading habits? If we constantly push potty and other forms of low humor on them as something they'll read, aren't we just setting the bar a tad bit low? 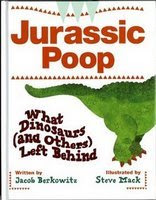 I was thinking about this last night as my son and I were reading a portion of Jurassic Poop: What Dinosaurs (And Others) Left Behind, written by Jacob Berkowitz and illustrated by Steve Mack. Yes, this is a book ostensibly about poop (see that word in the title?), but it is SO MUCH MORE. The book discusses fossils, fossilization, carbon dating, history, archaeology, and the work of several different scientists. My son was drawn in more by the dinosaur connection than anything else, but since reading it he has been endlessly fascinated with the notion that you can learn about the past from things (artifacts) that are left behind, poop being one of them.

There are a number of books on low-brow topics that we hand to reluctant readers in an attempt to encourage them to read. However, the base nature of these topics and the quality of the work don't need to be mutually exclusive. (Oh, a book about poop? Must be crap!) So, in an effort to elevate some topics and/or titles perceived to be low-brow, here are some books (nonfiction all!) that will interest boys AND girls by the very nature of their FABULOUSLY INTERESTING content.

*****
That list was filled with books on poop, toilets, underwear, and more. Why mention this in a book review? Because I've found a book (heck, a whole series!) that could easily be added to this list.

Gary D. Robson has written 20 books in the Who Pooped in the Park? series. Just take a look at this map to see some of the locations covered. I had no idea there was a book for Virginia! I'll be picking that one up for my outdoor education workshops soon. 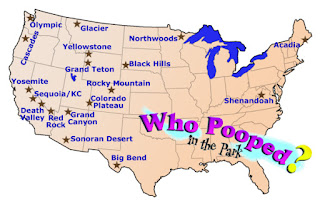 You can learn more about the series at Gary's web site.

The latest book in the series is WHO POOPED IN CENTRAL PARK? SCAT AND TRACKS FOR KIDS. Emma, Jackson, Lily and Tony spend a day walking through Central Park, beginning at the Central Park Zoo and ending at Farmer's Gate. At the beginning of their walk they meet a worker named Lawton who tells them he can identify animals by their scat and tracks. As the kids move through the park, they stop along the way to make observations, talk to people they meet, and look at poop and tracks. It's certainly an interesting way to spend the day, and the kids are fully engaged with their explorations. Back matter includes additional information (scat and tracks) on ten of the animals observed directly or indirectly through the signs they leave behind.

While I like the story and, I was even more enamored of the informational boxes on most double-page spreads titled "The Straight Poop." These boxes, added to the text, provide readers with a wealth of information. Here's an example of what you'll find in these boxes.

Even though this book is set in Central Park, folks in the northeast, particularly in urban areas or close to state and local parks, will find this a useful guide. Even kids who don't live in and around NYC will learn something about the myriad of animals depicted. And really, who can resist a book about poop? Certainly not me.
Posted by Tricia at 12:01 AM