Monday Poetry Stretch - Things To Do

In honor of Elaine Magliaro, who has a new book coming out on February 7th, I thought it might be fun to write "Things To Do" poems.

Elaine wrote a terrific post way back in 2010 describing how she got started writing things to do poems. Inspired by the poems of Bobbi Katz, Elaine took to writing list poems in this format with her second graders. The post, The Super Duper "Things to Do" Poems Post, includes example poems written by/with her students, as well as links to original poems Elaine wrote in this form. 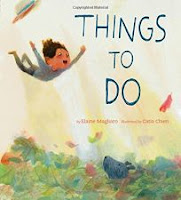 Elaine's book, Things to Do, is filled with poem that describe "things to do" if you are dawn, a bird, honeybee, an acorn, the sky, and more.

Here's an excerpt from a poem that didn't make it into this collection.

Things To Do If You Are a Castle

Stand on a stony cliff
overlooking the sea.
Wear a thick wall of armor.
Sprout tall turrets.
Be a haven.
Drop your drawbridge
for damsels in distress.

I hope you'll join me in writing a "Things To Do" poem this week. Please share a link to your poem or the poem itself in the comments.
Posted by Tricia at 12:01 AM