After watching Saturday Night Live the last few weeks, limericks and clerihews have been rattling around in my head. I thought it might be fun to write some limericks this week.


Limericks are humorous nonsense poems that were made popular in English by Edward Lear. Limericks not only have rhyme, but rhythm. The last words of the first, second, and fifth lines all rhyme, and the last words of the third and fourth lines rhyme. This means the rhyme scheme is AABBA. The rhythm of a limerick comes from a distinct pattern. Lines 1, 2, and 5 generally have seven to ten syllables, while lines 3 and 4 have only five to seven syllables. Here is an example from Lear's book. 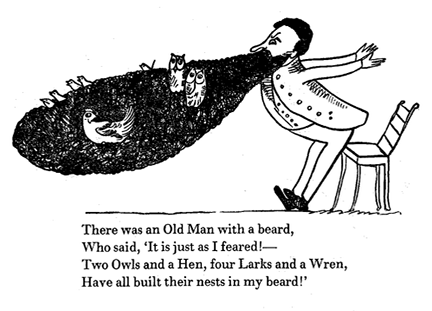 If you can't read the text, here's the limerick in the 5-line form usually seen today.

There was an Old Man with a beard,
Who said, 'It is just as I feared!
Two Owls and a Hen,
Four Larks and a Wren,
Have all built their nests in my beard!'

You can read Lear's A Book of Nonsense online, which includes 112 limericks.


I hope you'll join me this week in writing some limericks. If you feel politically inclined, that would be fun too. Please share a link to your poem or the poem itself in the comments.
Posted by Tricia at 10:42 PM