Conference on Teaching Race in the Classroom - Part 2

In Part 1 of this series of posts I provided an introduction to the National Museum of African American History and Culture, the site of the professional learning event I attended last week entitled Let's Talk: Teaching Race in the Classroom.

Why attend an event like this? I suppose I'd respond by asking, "Why NOT?" Why don't more educators think deeply about issues of race and racism and how they impact classroom practice, the development of racial identity, and the health and well-being of children?

On our first day, after brief introductions, we worked together to develop some ground rules and group norms. 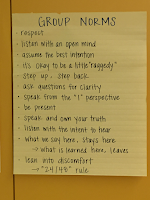 After we agreed to these norms, we spent the morning and early afternoon getting to know one another. This was painful for me and many of the other introverts in the room. These are just not activities I enjoy doing, but I understand the necessity for learning about one another, honoring our similarities and differences, making connections, and developing a level of comfort with others that allows us to view the classroom as not just a safe space, but a brave one. After this we did some active listening activities and then got into small groups to define and discuss race and racism. The small group then broke into pairs and we shared personal stories. When all the groups came back together we took some time to do a quick written reflection, and then shared one word that described how we were feeling.

We ended at 4 pm and I had the opportunity to spend the rest of the afternoon in the museum. I took advantage of the lack of a line to hit the history galleries and spent all my time on Concourse 3, reading and taking in all that I could.

On the second day we began with a gallery exploration before the museum opened. What a change from my time in the gallery the prior afternoon! I can't tell you what a gift it was to have so much time in the museum, but even more so, to have time to explore before the crowds descended was incredible. We broke into groups and participated in the Zinn Education Project activity entitled The Color Line. Each group was responsible for making a series of predictions before we entered the gallery. Here are the questions we tackled.
After our walk through the gallery it was clear that numerous colonial laws were enacted to create division and inequality based on race. The roots of race as a social construct were planted here. In examining this history it is possible to understand the origins of racism in the United States and who benefits from it.

Our day continued with two outstanding presentations. The first, Bias in Childhood: When Does it Emerge and How Do We Reduce It? was delivered by Melanie Killen of the University of Maryland at College Park. She shared the fascinating results of the work she and her graduate students have been conducting. I learned so much from this presentation. I was struck by some of the misconceptions people hold about bias in childhood. These include:
Melanie shared the results of a study she led that was commissioned by CNN. In this study, a group of 145 African-American and Caucasian children, ages 6 and 13, from six schools across three states were shown images that were designed to be ambiguous and asked the following questions:
The study explored how children’s interpretations of the images changed when the races of the characters were switched and found differences between the races as young as age 6. You can learn a bit about that study in this introductory video.
You can view the remaining segments on this research in Kids on Race: The Hidden Picture Part 2 and Kids on Race: The Hidden Picture Part 3.

The results were astounding and frankly, a bit depressing. We did learn that school diversity reduces implicit bias and boosts expectations for inter-racial friendships in school. We also learned that there is NO RESEARCH to suggest that a colorblind approach is effective. What we do know is that:
The second presentation of the day, Middle Childhood & Teens: Cognitive Development, Racial Identity Development, and Talking About Race, was delivered by Erin Winkler of the University of Wisconsin. Through the lens of Piaget and Vygotsky, we looked at how racial identity and bias develop. Once incredibly discouraging note from this presentation was the cyclical nature of bias. We know that society primes us for implicit bias, and implicit bias reinforces inequality in society. So, the question becomes, how do you break this cycle?

Erin shared a lot of good information about the development of racial identity for African Americans (Cross' model) and White Americans (Helms' model). We learned that taking a colorblind approach backfires because racism and bias cannot be addressed if we fail to recognize it. Children exposed to a colorblind approach often have trouble recognizing not only subtle racism and racial bias, but also explicit racism. Ultimately, colorblind language renders structural racism invisible. Let that one sink in for a moment ... This means we must get comfortable talking about race, racism, and inequality. We must normalize talking about race in the classroom.

After taking all this in, we ended our day in small groups based on grade-level affinity (I went with the elementary folks) and continued to process what we were learning in the context of the issues we face at our own institutions.

I learned so much in these first two days that I was a bit overwhelmed. I spent quite a bit of time thinking about how to share this information with preservice teachers. We teach human growth and development in our program, but I'm not sure that the formation of racial identity is something that is even addressed. You can bet this is something I'll be lobbying for.

This was just the beginning of my journey during this incredible week of learning. Stay tuned for more. I'll be back tomorrow to share the content of the conference from days 3 and 4.
Posted by Tricia at 9:57 PM