"So, what will it be, Bear" asked Hare. "The top half or the bottom half? It's up to you--tops or bottoms." 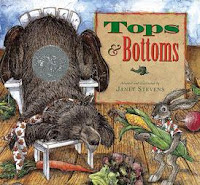 I had great success using this book in the classroom for teaching plant parts. A bit later it occurred to me that this also a terrific choice for teaching economics, as the story is all about opportunity cost, or that valuable alternative you give up when you make a decision.

Tops and Bottoms has gorgeous double-page spreads in a format that opens from top to bottom instead of left to right. This cleverly designed and beautifully illustrated book was awarded a Caldecott Honor medal in 1996.

Since Tops and Bottoms, Janet Stevens has illustrated many lovely books, including some she has collaborated on with her sister and some she has written herself. You may recognize a few of these titles:
Like many illustrator's today, Janet Stevens is very busy working on new projects. However, she wasn't too busy to offer her time and talent to the cause of Robert's Snow. For this year's auction, Janet created a snowflake entitled "I am not a snowflake, I'm a dog!" 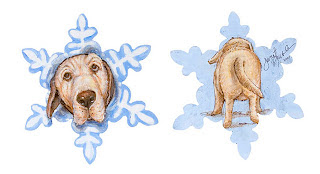 I love the wrinkled face full of personality and can just imagine getting thumped by that tail as it swings. If you are interested in bidding on this heartwarming snowflake (oops, I mean dog!), be sure to follow the link for Auction 2. Don't forget that 100 percent of the proceeds from this online auction will benefit sarcoma research at Dana-Farber Cancer Institute. While you are there, be sure to view all the snowflakes up for auction. Each and every one is a unique and amazing work of art.

Finally, be sure to check out the other snowflake illustrators being featured today.
That about wraps it up. I'd like to end this post with a poem from a random Christmas card I found while reading through an old box of letters in my attic. It's an appropriate description of all the wonderful people driving and contributing to Robert's Snow. 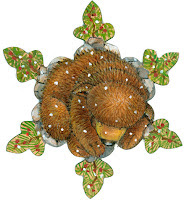 Like snowflakes
floating gently,
unexpectedly
to earth,
small kindnesses
touch our lives.
First one, and then another
and another,
until at last the world is
bright and shining
with goodwill.

(This snowflake created by Janet Stevens for the 2005 auction.)