As usual, the list of outstanding trade books for science published by the NSTA contains an amazing range of excellent titles. The criteria used in selecting books are:
As with any "best of" list, one can always argue for the inclusion of additional titles. I read more than 100 science books published last year (not many in the grand scheme of things), most of which did not make the list. Using the same criteria and categories NSTA used, I am recommending the following additional 2008 titles as outstanding resources in science.

Archaeology, Anthropology, and Paleontology
Evolving Planet: Four Billion Years of Life on Earth by Erica Kelly and Richard Kissel - Written as a companion to the exhibit of the same name at Chicago's Field Museum of Natural History, this book provides an overview of the diversity of life on Earth throughout time. This comprehensive work also includes a glossary, pronunciation key, bibliography, and an index.

Biography
George Washington Carver, written by Tonya Bolden - Illustrated with photographs and historical artifacts, this book follows Carver's life from slave and orphan to his days at Iowa State College, and his later life and work in the field of agriculture. 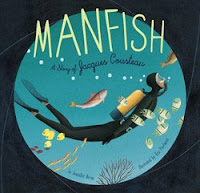 Manfish: The Story of Jacques Cousteau, written by Jennifer Berne and illustrated by Éric Puybaret - Gorgeous illustrations and a lyrical text help tell the story of a man who believed "Il faut aller voir," or "We must go and see for ourselves." Young readers will be inspired by Jacques quest to breathe underwater and his development as a naturalist.

Earth and Space Science
11 Planets: New Views on the Solar System, written by David Aguilar - This book highlights each of the planets in the solar system, arriving at 11 by the inclusion of the 3 dwarf planets, Pluto, Ceres and Eris. Not to be missed is the section "Solar System in a Grocery Bag," which describes the planets in relation to common foodstuffs.

The Dirt on Dirt, written by Paulette Bourgeois and illustrated by Martha Newbigging - This book is an interesting mix of information and activities (labeled FUN with Dirt). In the categories of You and Dirt, Dirt Matters, Buried!, Building with Dirt, and Dirt for Gardening, readers learn everything under the sun about dirt. (Read my review.)

The Mysterious Universe: SuperNovae, Dark Energy, and Black Holes, written by Ellen Jackson and illustrated by Nic Bishop - What do astronomers do? Some, like Alex Filippenko and his colleagues (the High-Z Supernova Search Team) look for supernovae and related large-scale astronomical phenomena. This book provides a fascinating portrait of the work of these scientists. 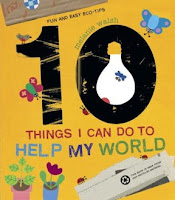 10 Things I Can Do to Help My World, written and illustrated by Melanie Walsh (Read my review.) - Simple text with cut-out illustrations provide an informative look at environmental responsibility for the youngest of readers.

The Brook Book, written and illustrated by Jim Arnosky - Arnosky takes readers by the hand and offers advice on how to interact with a brook, including how to safely explore the water, how to collect things, bird watching and sketching wildflowers at a brook , looking for animal tracks, and more. Included is a note to teachers on how to use a brook for educational purposes, as well as a list of titles for "brook explorers and naturalists."

How We Know What We Know About Our Changing Climate: Scientists and Kids Explore Global Warming, written by Lynne Cherry and Gary Braasch - Using real scientists and their work, Cherry introduces the methods the scientific community has used to document climate change. Readers also learn about the ways in which individuals and communities can work to help remedy the problem.

Science Warriors: The Battle Against Invasive Species, written by Sneed B. Collard III - This book, part of the Scientists in the Field series, focuses on four invasive species that have wreaked havoc on the environments where they have established themselves. Species examined include the brown tree snake, red imported fire ant, melaleuca tree, and zebra mussel. Collard describes how invasion occurs, as well successful and failed efforts to control these species. Back matter includes matter includes tips on helping to stop invasive species, a glossary, and web resources.

Ice Bears, written by Brenda Z. Guiberson and illustrated by Ilya Spirin - Follow a mother polar bear and her cubs from birth as they make their way out of their den in spring and face the harsh environment of the Arctic. There is a subtle message about global warming and its impact on the environment that everyone needs to understand. (Read my review.) 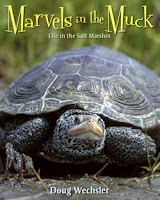 Marvels in the Muck: A Day in the Salt Marsh, written by Doug Wechsler - Salt marshes are the wetlands found near ocean beaches and the mouths of rivers. Wechsler provides a fine introduction to this habitat and the creatures that live in it. Back matter includes information on tides, suggested readings and web sites, a glossary and an index.

Our Three Bears, written by Ron Hirschi with photographs by Thomas Mangelsen - This book introduces readers to the three types of bears found in North America--black, grizzly and polar. Short paragraphs accompanied by gorgeous color photos explain the hibernation patterns, habitats, diets, size, and population estimates for each species.

Sharks: Biggest! Littlest!, written by Sandra Markle with photographs by Doug Perrine - Large print text and striking photographs introduce readers to "big" and "little" sharks, as well as those with some interesting physical features, like a hammer-shaped head or unusually long tail. Readers will find a full-color world map noting the location of each shark in the text, a glossary, and list of additional resources.

Sisters and Brothers: Sibling Relationships in the Animal World, written by Steve Jenkins and Robin Page, and illustrated by Steve Jenkins - Illustrated with Jenkins' signature paper collages, the authors provide a wealth of fascinating facts about all kinds of animal siblings. Back matter provides additional facts about each species highlighted.

Wolfsnail: A Backyard Predator, written by Sarah Campbell with photographs by Sarah Campbell and Richard Campbell - This book for the younger set uses stunning photographs and clear, concise language to introduce readers to a predatory snail. Back matter includes facts about wolfsnails and a glossary of snail words.

Have you seen a science book published in 2008 that you believe should be on this list? Please leave me a note and let me know about your favorites.
Posted by Tricia at 12:37 PM