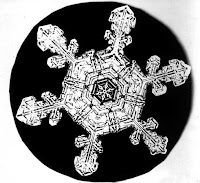 We had a foot of snow one week before Christmas. The bulk of it was still here on Christmas Eve, but it all began to melt away in the rain on Christmas day. Now that it's gone, I'm still thinking of snow. Here are two terrific nonfiction reads about it. 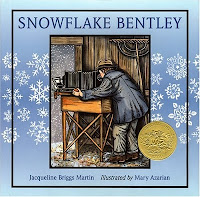 Snowflake Bentley (1998), written by Jacqueline Briggs Martin and illustrated by Mary Azarian - This Caldecott Medal winner tells the true story of Wilson Bentley, a farmer who spent the better part of his life studying and photographing snowflakes. It begins this way. 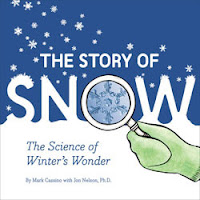 The Story of Snow: The Science of Winter's Wonder (2009), written by Mark Cassino with Jon Nelse, Ph.D. and illustrated by Nora Aoyagi - A visually appealing and highly informational book, readers learn that snow begins with a speck and then follow along as that speck becomes a snow crystal. Photos of snow crystals are included with a comparison of the enlarged images to a snow crystal of actual size. The shapes of snow crystals are examined (stars, plates, columns), as is their relationship to the number six.

There is much to learn and wonder about here. The book ends with a guide for catching snow crystals. Teachers will find the teacher's guide for this book particularly helpful.

This post was written for Nonfiction Monday. Hosting this week is Diane Chen at Practically Paradise. Do take some time to check out all the great posts highlighting nonfiction this week.
Posted by Tricia at 7:19 PM