Nonfiction Monday - Born to Be Giants

I have a nine year old son who is crazy about dinosaurs and has a stack of books to prove it. Did he really need another title to add his library? After reading and rereading Born to Be Giants: How Baby Dinosaurs Grew to Rule the World, the answer is an unequivocal YES! 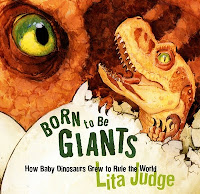 The baby T-Rex hatching on the cover under the watchful of eye of its mother,made we want to open the book. The huge taloned feet pictured beside a hatching oviraptor on the title page immediately had me wondering how an animal so large could care for an offspring so much smaller in size. Born to Be Giants: How Baby Dinosaurs Grew to Rule the World, written and illustrated by Lita Judge, not only answers this question, but explores how dinosaurs hatched from eggs grew and survived to become some of the largest creatures that ever walked the earth.

Judge has broken new ground with this book, taking evidence discovered by paleontologists and using that information to hypothesize how dinosaurs may have behaved. Judge also distinguishes her work from others by describing dinosaurs by making comparisons to living animals. Here's an excerpt that shows just how deftly she combines these two approaches.

Some plant-eating dinosaurs kept their nests safe by grouping into large colonies. Over a thousand fossilized nests of HYPACROSAURUS, a duck-billed dinosaur, were found in one area!

Penguins, pelicans, and many seabirds gather at huge nesting sites today. The nests are clustered with just enough space to fit babies and adults. The parents work together, alerting each other if a predator comes near.

There are many comparisons to modern-day birds here, and given the view that some species of dinosaurs may have evolved to become today's birds, these are reasonable comparisons to draw.

Judge doesn't shy away from difficult vocabulary in the text, using words like altricial and precocial. However, readers are supported in understanding these words through simple, explanatory sentences, as well as the inclusion of a glossary. Here's an example.

Most bird species today are altricial. Their babies are helpless when they hatch, with wobbly, undeveloped legs and weak necks. The hatchlings must stay in the nest until they grow stronger and older. It is likely that Maiasaura were altricial—like robins today.

Eight species of dinosaur are explored in the book. Early on readers are introduced to Argentinosaurus, a dinosaur that likely weighed as much as 17 elephants. Imagine for a moment just how large this dinosaur must have been. Now juxtapose this with the knowledge that the largest dinosaur eggs ever found were only 18 inches long. As Judge tells readers, "These mothers probably couldn't protect their tiny babies without trampling them underfoot." Judge continues:

A herd of Argentinosaurus was an earth-shaking, bone crushing stampede of feet. Their tiny babies probably hid under forest cover. Hungry, meat-eating dinosaurs stalked them for a bite-sized meal. Huge crocodiles ate them. Even little mammals ate them. The babies were hungry all the time and had to find their next meal without becoming one! Only a few survived.

Dinosaurs may have been giants, but surviving to adulthood was no easy task.

The text leaves readers much to ponder while also providing a wealth of factual information. There are some brief notes in the back matter about each of the dinosaur species, including pronunciation (always important with dinosaur names), approximate size, location of fossils, and period of appearance.

The watercolor illustrations do a fine job of portraying scale. They also give a clear sense of what these dinosaurs may have looked like, what their coloration may have been, and how their nests may have been constructed. Kudos to Judge for making even ferocious meat-eating babies look appealing. Don't believe me? Check out the illustration of the Troodon hatchlings being fed by a parent (near the end of the book). I wouldn't call them cute, not with those serrated teeth and scraggly feathers, but they are a bit endearing.

This title is a must-have for classrooms and school libraries. Science teachers tackling the nature of science, scientific method, survival of the fittest, animal behavior and more will find this one a gem. Additional resources can be found at the author's web site where there is a page devoted to the book. On it you'll find preliminary and working sketches of the illustrations, dinosaur coloring pages, and photos from the author's dinosaur digs with the Royal Tyrell Museum.

Well written, handsomely illustrated, and thoughtfully organized, Born to Be Giants offers a fresh perspective on a topic kids can't seem to get enough of. After several readings my son said, "Don't you wish we could meet some REAL baby dinosaurs?" No, actually, I don't, but I was thoroughly satisfied with the introduction provided by Judge. You will be too. Highly recommended.

Book: Born to Be Giants: How Baby Dinosaurs Grew to Rule the World
Author/Illustrator: Lita Judge
Publisher: Roaring Brook Press
Publication Date: April 2010
Pages: 48 pages
Grades: 3-6
ISBN: 978-1596434431
Source of Book: Personal copy published from Amazon.
This post was written for Nonfiction Monday. Hosting this week is Anastasia Suen at Picture Book of the Day. Do take some time to check out all the great posts highlighting nonfiction this week.
Posted by Tricia at 12:01 AM