Marilyn Singer and Turtle in July/Fireflies at Midnight 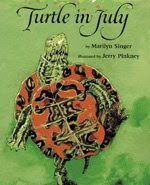 So Turtle in July is the book that introduced me to Marilyn Singer. In the late 80s when I was teaching a unit on animal adaptations I decided I wanted to share some animal poems with my students. While browsing in a local bookstore I stumble upon Turtle in July. This collection of nature poems includes poems that pair animals with the months of the year as well as four seasonal poems focused on the bullhead (a type of catfish). The poems on hibernation (timber rattlesnake) and migration (Canada goose) sold me on the book and turned me into a fan. I've been looking for and reading Marilyn's poetry and nonfiction ever since!

Here's what Marilyn had to say about these titles.

I've mentioned that TURTLE IN JULY began as a prose picture book about a grandmother and grandson walking around, looking at animals, and that it never worked. I was at pond in the Japanese garden at the Brooklyn Botanic Garden when I saw a turtle and heard its voice in my head telling me how good it felt to be in cool water during that hot day in July. I really loved the idea of getting under the shell of that turtle, as it were, and wondered if I could get into the skin of other animals as well. To do that, I spent quite a bit of time at parks, zoos, wild places, observing, as well as researching. Sometimes (usually when no one was looking), I tried to make sounds or move like those animals as well. 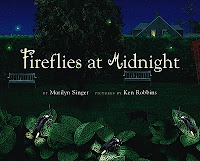 I did the same thing for FIREFLIES AT MIDNIGHT. TURTLE features animals during different months/seasons; FIREFLIES at different hours of the day. I have always loved fireflies--I used to catch them when I was a kid and put them in a jar, then let them go--but I think the first poem I actually wrote for this book might have been "Frog." I've written a lot of frog poems. I'm very attracted to these amphibians, though I'm not sure why. My husband and I have a house in Connecticut and frogs rule the night there with their calls. All of the animals in TURTLE are in the same general locale, but for FIREFLIES, I was thinking even more specifically of critters I've seen near that pond in Connecticut.

I want to share two wonderful things regarding these two books. The first is that an elementary school class set "Beavers in November" from TURTLE to music and performed it for me. What a delight! The second is that I writer I idolize, Susan Cooper, was handed FIREFLIES at a conference. I stood there as she looked through the book, then pointed to "Spider" and said, "Very good poem." I grinned like a fool!

If you teach poetry writing, you can use Fireflies at Midnight to teach about personification. Learn more by reading the article Personification by Lee Bennett Hopkins.

You can find a nice review of Fireflies at Midnight with some classroom suggestions at the blog written by Emily Cox.

All poems ©Marilyn Singer. All rights reserved.
Posted by Tricia at 10:31 AM