Today is the last day of the Blogging for the Cure effort to raise awareness of Robert's Snow, and I have the distinct pleasure of presenting an interview with author/illustrator Teri Sloat. I sent Teri a series of questions, which she kindly answered. She began by saying "I always say too much, so edit away." Hah! Once you read her thoughtful responses, you'll be glad I didn't cut a word. So, without further ado, I give you the incomparable Teri Sloat. 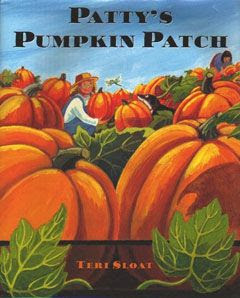 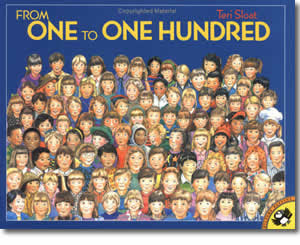 Tricia: When did you decide you wanted to be an illustrator of children’s books?
Teri: To be fair, I think it was having a mother that read to me and to the other kids in the neighborhood that made me know picture books were special. After college, I taught for many years in preschool through 3rd grade classrooms in Yup'ik villages in Alaska and also in Kindergarten before moving to California. It was during that time that I fell in love with books that read well enough out loud to please children whose English level was low. I ended up practicing in the village and making books during those long winter nights. When I found out that I liked the whole process I decided that someday that is what I was going to do.
Tricia: Which illustrator's have influenced your work?
Teri: I watched a movie with my students about Ezra Keats while I was teaching and loved the idea of making a book from marbleized paper. My class marbleized lots of paper and made collages. I took all the rest of the pieces and made my first book. Others that I keep on my bookshelf have been Arnold Lobel, Leo and Diane Dillon, Tomi de Paolo and Chris Van Allsburg. They always seem to take you to another world with their art. Also there is a wonderful artist in Alaska who has done a couple of picture books, whose name is Rie Munoz. Our house is full of her art because it makes me happy.
Tricia: What media do you work in?
Teri: The media I use is different for each book. One of my favorites is Caran d'Ache watercolor crayons. They are vivid and blend into one another. They can be thick and pasty or used like a wash. You will find them in Hark! The Aardvark Angels Sing! and Berry Magic. I'm a Duck! is done with pastels. I started with acrylic but they were too heavy and flat for the content of the story. Much of the time I start with an acrylic wash and burnish with a variety of colored pencils from Prismacolor to Aquarelle. Just as important is the kind of paper that I'm always experimenting with. 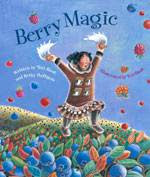 Tricia: I loved reading about you on your web site and learning about your years in Alaska. Can you tell me how your time there has influenced your work?
Teri: I started illustrating at the Bilingual Education Center. They needed an illustrator and there were none around for 4-500 miles so I got the job. I learned as I did small story books and the first folklore from the region, and had a chance to make up some stories of my own for readers that were in the Yup'ik language. I realized how wonderful trade books were in quality and color compared to the books we were printing ourselves and became determined to learn the whole process and to publish some of the folklore at a major publisher. But most of all, we had a slower life-style, and without television, I had time to read and daydream. I took long walks, traveled by boat and snowmachine, sat for hours ice fishing. Living on the tundra literally put the white space all around me that lets my mind drift. I made up many stories and images while there, and now I'm putting them in prints that are on my web-site. There are some that may someday be books of their own, but most of my books start with images. I also learned to write on the spot, as the girls were always asking me to play story knife with them and they expected a story with images scratched into mud to appear pretty instantly. They taught me not to worry about how well I drew (which I still worry about) but to get with it and let the pictures tell the story.
Tricia: Can you tell us a bit about your work with Alaska Northwest Books First Language Program?
Teri: The bilingual project I was working in was the second in the US and we had a staff of 7-8 people to create, translate, print, bind and ship books to the villages. In 5 years we created about 250 books, which is amazing in retrospect. But the entire time we wanted the kids to hold books in their language that matched the quality of books in English. We started working with a printer in Anchorage and soon we had basal readers, with recognizable characters professionally printed....a step in the right direction. But the only trade books they had with their wonderful stories and illustrations were pasted over in their language. So after 30 years we finally found a publisher that would print a minimum of 1500 books in one of the indigenous languages. . . almost a non-profit amount, if a native group or district would make the purchase. Translators worked to make sure their words fit artistically into the space provided to make handsome books. The Yupiit School District was the first district brave enough to make the purchase and there were celebrations in the libraries in the villages when the books were presented. It is a slow process with brave translators, but now many other indigenous groups are seeing the value and buying into the program.

Tricia: You have written and illustrated your own books and illustrated books for other authors. How is illustrating a book that someone else has written different from one you've written yourself?
Teri: I haven't illustrated that many for other writers, but when I have I still feel like I'm writing part of the story. I'm making up and filling in visuals for the story that they are telling and creating a world for the story to take place in. It is different because the text I'm handed is
fairly finished. When I illustrate my own books, I work on the writing, eliminating and adapting the rhythm to the images that come up so that both the writing and the art are finished together. Sometimes I write a wonderful story but know that I'm not the one that can make it the best book with my illustrations. So I turn it over to another illustrator to add their own side of the story. The result is a delightful surprise. I've been lucky to have Nadine Westcott, R.W. Alley, Reynold Ruffins and Stefano Vitale as illustrators as well as Mike Wright's hysterical joke book illustrations. Betty Huffmon and I are in the process of writing a third book together, and that collaboration is a wonderful experience.

Tricia: Are you currently working on any new projects? Do you have a new book coming out in the next year or two that you would like to tell us about?
Teri: There Was an Old Man Who Painted the Sky will come out in the spring of 2009. It is a take off again of The Old Lady Who Swallowed a Fly, but is a creation song. I'm excited about the art which I have just seen for the first time. The book ends with a tribute to the girl who discovered the first cave paintings in Altamira, and is dedicated to the observation and wonder of children. I'm fascinated with cave paintings and how pigments were made and sprayed through tubes onto the wall and have used the book as an excuse to visit many caves. It tells the story of the old man who paints the world into being and then hands his paints to the people who paint themselves. As they dance round the fire their spots and stripes fly off onto the creatures watching them. Then the last first says: There was a young girl in a cave all alone, who found the whole world had been painted on stone. There were children like her; there was woman and man, there were creatures of water and creatures of land. There was earth and the planets that spun, one by one, as they whirled through the sky, while they circled the sun. She found the old man, painted high on the wall, and she wondered and wondered as she looked at it all. . . How did he do it, the old man in the sky? How did he paint the sky? It's so high.

Tricia: I love the What I Learn From Students section of your web site. Does this interaction with children ever make you miss teaching?
Teri: I sometimes miss having my own classroom, but now I get to teach the thing I am most excited about. . . . imagination. I visit many schools a year, and often do workshops on fable writing, poetry and art with smaller groups. I think I have the best of both worlds. I get to use my imagination and to have exchanges with younger minds who are still so full of imagination and just need skills to share it with the rest of the world. The art of young students has changed my art forever and helped me take the limits of "realism" off my own art. 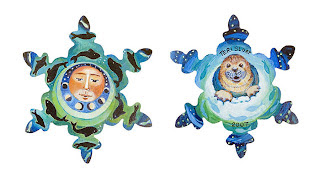 Tricia: Please tell us about your Arctic Christmas snowflake.
Teri: My snowflake is influenced by Yup'ik masks. The center of mine is the moon and if it were hanging on a wall, there would be spokes going out to the seals, the whales, and the fish on the ends. (To the left is a print that Teri was making when she made the mask.) The print is called Seal Moon and is a story I made up about a seal that fell in love with the moon shining down through the hole in the ice. That love is turning the seal into a man.

Teri closed her message by saying that creating the snowflake was one of her favorite projects of the year. I will echo her sentiments by saying that featuring illustrators here, and reading about so many more all across the blogosphere has been an amazing experience. I hope we have raised awareness to a level where Robert's Snow will make oodles of money for cancer research.

If you are interested in bidding on this wonderful snowflake, be sure to follow the link for Auction 2. Don't forget that 100 percent of the proceeds from this online auction will benefit sarcoma research at Dana-Farber Cancer Institute, and that all but $25 of the winning bid is tax deductible! While you are there, be sure to view all the snowflakes up for auction. Each and every one is a unique and amazing work of art.

Before you leave, be sure to check out the other snowflake illustrators being featured on this last day before the auctions begin.
Finally, help me in thanking Teri for sharing her time and talent. I have been inspired by her words and work. I hope you are as well. If you want to learn even more about Teri and the book Berry Magic, visit Just One More Book! and listen to this great podcast from our friends Mark and Andrea. You can also learn more about Teri at her website. Thanks, Teri!
Posted by Tricia at 6:51 AM