April 1st is April Fool's Day. This day of trickery, also known as All Fools' Day, has been celebrated in different cultures for a number of centuries. It was popularized in 1700 by English pranksters who played practical jokes on one another.

One of the earliest poems about this day comes from Poor Robin's Almanack, an English satirical almanac that was first published in 1663.

Poor Robin's Almanack, 1790
The first of April, some do say
Is set apart for All Fool's Day;
But why the people call it so
Nor I, nor they themselves, do know,
But on this day are people sent
On purpose for pure merriment.

It seems appropriate that on the day I kick off this year's National Poetry Month project I share a favorite poem by Myra Cohn Livingston. It is from her book entitled Celebrations. 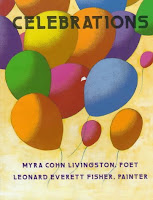 The maple syrup's full of ants.
A mouse is creeping on the shelf.

Is that a spider on your back?
I ate a whole pie by myself.

The kitchen sink just overflowed.
A flash flood washed away the school.
I threw your blanket in the trash.

Kenn Nesbitt shares all kinds of poetry on his web site, Poetry4kids.com. Here's his poem for April Fool's Day.

Mackenzie put a whoopie cushion
on the teacher's chair.
Makayla told the teacher
that a bug was in her hair.

Alyssa brought an apple
with a purple gummy worm
and gave it to the teacher
just to see if she would squirm.

Elijah left a piece of plastic
dog doo on the floor,
and Vincent put some plastic vomit
in the teacher's drawer.

Amanda put a goldfish
in the teacher's drinking glass.
These April Fool's Day pranks
are ones that you could use in class.

Before you go and try them, though,
there's something I should mention:
The teacher wasn't fooling
when she put us in detention.


I learned long ago that it's a good idea to share your ideas for a project early, as you never know who might show up in support of your work. I was thrilled to receive a message from Pat Lewis just a few days after posting my plans for this year. He graciously sent me a number of poems to share with you.

They say you’re the picture of pretty,
You’re as warm as the heat from the sun,
You’re the lock and the key to the city,
You’re the meat in a hamburger bun!

They say you’re the pick of the litter,
They say that you’re such a good egg.
But, kid, have you stopped to consider
Someone might be pulling your leg?!

You can learn more about April Fool's day in this very short video from The History Channel.

That's it for today. I hope you'll join me tomorrow for our next celebration.
Posted by Tricia at 12:00 AM