April 27th is Babe Ruth Day. On April 27, 1947, the Yankees hosted Babe Ruth Day at Yankee Stadium. The event was held to honor the ailing baseball star, who was in failing health due to throat cancer. You can read the New York Times article from the following day at On This Day.


One of my favorite baseball movies is The Sandlot (1993). Here's a favorite scene side-by-side with the NY Yankees, in a commercial they did for the opening of the 2015 season. In it, the boys school their friend on just who Babe Ruth was.

You can learn more about this commercial in this Inside Edition video.

Let's start today with a poem sent to me by J. Patrick Lewis for this month's project.

The Battle Hymn of the Babe
by J. Patrick Lewis

[Note:  To be sung to “The Battle Hymn of the Republic.”]

He’s American as Jell-o, apple pie, and ice cream cones.
He’s synonymous with magic, miracles, and milestones.
He’s the nemesis of Beantown where they hate him in their bones.
Babe Ruth is marching on.

Watch him nonchalantly waving, as he steps up to the plate,
To the spectators applauding for the Yankee head of state.
Will the Sultan swat one out today? They won’t have long to wait.
Babe Ruth is marching on.

The pitcher eyes him cruelly, the Bambino eyes him back,
Like a bike with training wheels up against a Cadillac.
When he points a warning finger at the useless warning track,
Babe Ruth is marching on.

He swings so hard you almost feel sorry for the air.
The second strike is in the dirt. The Babe? He doesn’t care.
But the umpire shrinks a little from the heat wave of his glare.
Babe Ruth is marching on.

Now here it comes, the best forkball the pitcher’s thrown all year . . .
Rainbowing to the right-field bleachers as a souvenir.
That pill could make it hail throughout the Western hemisphere.
Babe Ruth is marching on.

Pat may not remember this, but he also sent me a baseball poem back in 2008. It's one of my favorite baseball poems.

A baseball poem
should swerve
like a sidearm curve

or tease a designated reader
with sublime
off-rhyme.

A baseball poem
should be as unexpected, say,
as an undetected
squeeze play

or explode like a six-run
bonanza and a grand slam
into the leftfield stanza.


When I think of baseball poems in general, three come to mind.

1. Every year when spring training begins and on opening day, I read the poem Analysis of Baseball by May Swenson. Here's how it begins.


It’s about
the ball,
the bat,
and the mitt.
Ball hits
bat, or it
hits mitt.

2. This poem that I memorized in middle school. It ends this way.


Oh, somewhere in this favored land the sun is shining bright;
The band is playing somewhere, and somewhere hearts are light,
And somewhere men are laughing, and somewhere children shout;
But there is no joy in Mudville—mighty Casey has struck out.

If you don't recognize it, the poem is Casey at the Bat by Ernest Lawrence Thayer.

3. I'm also quite fond of this poem by Ogden Nash. Line-Up for Yesterday: An ABC of Baseball Immortals was written for the January 1949 issue of SPORT Magazine. The poem pays tribute to 24 of the games greatest players. Here's how it begins. 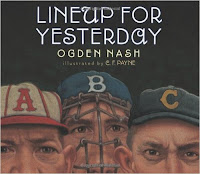 A is for Alex
The great Alexander;
More Goose eggs he pitched
Than a popular gander.

B is for Bresnahan
Back of the plate;
The Cubs were his love,
and McGraw his hate.

C is for Cobb,
Who grew spikes and not corn,
And made all the basemen
Wish they weren't born.

Creative Editions published this poem, illustrated by C.F. Payne in 2001.

I'll wrap up with this poem by Franklin Pierce Adams.

A Ballad of Baseball Burdens
by Franklin Pierce Adams

The burden of hard hitting. Slug away
Like Honus Wagner or like Tyrus Cobb.
Else fandom shouteth: “Who said you could play?
Back to the jasper league, you minor slob!”
Swat, hit, connect, line out, get on the job.
Else you shall feel the brunt of fandom’s ire
Biff, bang it, clout it, hit it on the knob—
This is the end of every fan’s desire.

I've written numerous times about my love for baseball and about baseball poetry. Check out the post Poetry in the Classroom: Take Me Out To the Ballgame from 2011 and Poetry A-Z: Day 27 ... Baseball from 2013.

You'll also find a wealth of baseball poems at the Baseball Almanac. Be sure to check out the poem Frosty and the Babe by John Robert McFarland.

I'm ending today with this gem.