Here is one of my favorite math-themed poems.

Arithmetic is where numbers fly like pigeons in and out of your head.

Arithmetic is seven eleven all good children go to heaven -- or five six bundle of sticks.

Arithmetic is numbers you squeeze from your head to your hand to your pencil to your paper till you get the answer.

Arithmetic is where the answer is right and everything is nice and you can look out of the window and see the blue sky -- or the answer is wrong and you have to start all over and try again and see how it comes out this time.

Arithmetic is where you have to multiply -- and you carry the multiplication table in your head and hope you won't lose it.

If you ask your mother for one fried egg for breakfast and she gives you two fried eggs and you eat both of them, who is better in arithmetic, you or your mother?

In Sandburg's Arithmetic (1995), an animated short based on the poem, Carl Sandburg narrates a beautifully illustrated film produced by Lynn Smith. You can preview the film below.


For a more mathematically inclined poem, here's one on my favorite irrational number.

The admirable number pi:
three point one four one.
All the following digits are also just a start,
five nine two because it never ends.
It can’t be grasped, six five three five, at a glance,
eight nine, by calculation,
seven nine, through imagination,
or even three two three eight in jest, or by comparison
four six to anything
two six four three in the world.
The longest snake on earth ends at thirty-odd feet.
Same goes for fairy tale snakes, though they make it a little longer.
The caravan of digits that is pi
does not stop at the edge of the page,
but runs off the table and into the air,
over the wall, a leaf, a bird’s nest, the clouds, straight into the sky,
through all the bloatedness and bottomlessness.
Oh how short, all but mouse-like is the comet’s tail!
How frail is a ray of starlight, bending in any old space!
Meanwhile two three fifteen three hundred nineteen
my phone number your shirt size
the year nineteen hundred and seventy-three sixth floor
number of inhabitants sixty-five cents
hip measurement two fingers a charade and a code,
in which we find how blithe the trostle sings!
and please remain calm,
and heaven and earth shall pass away,
but not pi, that won’t happen,
it still has an okay five,
and quite a fine eight,
and all but final seven,
prodding and prodding a plodding eternity
to last.


Let's move from pi to twin primes. You needn't watch the entire video, but Harry Baker spins a love poem for lonely prime numbers in the early minutes. You need to hear it. 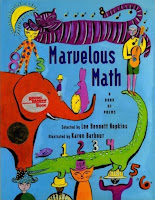 Marvelous Math: A Book of Poems, selected by Lee Bennett Hopkins and illustrated by Karen Barbour, is a collection of 16 poems on calculators, division, multiplication, fractions, time, and other mathematical topics. Here's an example.

Divide
the year
into seasons,
four,
subtract
the snow then
add
some more
green,
a bud,
a breeze,
a whispering
behind
the trees,
and here
beneath the
rain-scrubbed
sky
orange poppies
multiply.

I've written about math and poetry before. Check out M is for Mathematical, a post from my 2013 National Poetry Month Project.

I'll wrap this up with this helpful video on The Mathematics of Poetry: Rhythm, Meter, and Rhyme.