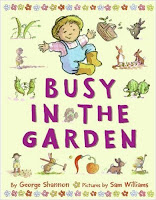 Busy in the Garden, written by George Shannon and illustrated by Sam Williams, is a collection of  24 poems that captures the joys of the garden.

Plant a little.
Plant a lot.
Plant the seeds and bulbs you bought.

Wait a little.
Wait a lot.
Wait much longer than you thought.

Pick a little.
Pick a lot.
Share the best bouquet you've got!

I Heard it From Alice Zucchini: Poems About the Garden, written by Juanita Havill and illustrated by Christine Davenier, is a magical collection of poems, by turns both whimsical and scientific, about growing things. Here's the poem that opens the book.


When I Grow Up

In the still chill of a winter night
seeds on the gardener's bench
rattle their packets
with chattering.

"The biggest watermelon."
"Greenest spinach."
"Toughest kale."
"A rutabaga round as the world."
"An everywhere zucchini vine."
"Cornstalk so tall I touch the sky."

Little seeds
with big plans,
chittering, chattering,
except for one,
not a murmur from his packet.

Hey, little seed,
what about you?
What will you be
when you grow up?

In the still chill of the winter night:
"I'm going to be FIRST!"

And the radish is right. 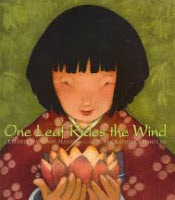 One Leaf Rides the Wind, written by Celeste Davidson Mannis and illustrated by Susan Kathleen Hartung, is set in a Japanese garden where a young girl counts the things she sees, like bonsai, koi, and lotus flowers. The left side of each spread contains an illustration of the objects being counted. On the right side of each spread is the printed numeral, a haiku describing the objects, and a footnote introducing readers to various aspects of a traditional Japanese garden. The book ends with a brief description of the Japanese garden and some information about haiku.

Here is an example.


9
Hoping for some crumbs,
they nibble at my fingers.
Nine glittering koi.
Koi fish are admired for their colorful appearance and
hardiness. They are also a popular symbol of
determination and strength. Ancient legend tells of a koi
fish that struggled up a huge waterfall in order to be
transformed into a dragon. 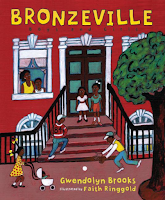 While this book isn't about gardens, it contains a favorite poem. Bronzeville Boys and Girls, written by Gwendolyn Brooks and illustrated by Faith Ringgold, is a collection of 34 poems that celebrates living in an urban setting. Every poem is titled for a child or children from the neighborhood.

I put a seed into the ground
And said, "I'll watch it grow."
I watered it and cared for it
As well as I could know.
One day I walked in my back yard,
And oh, what did I see!
My seed had popped itself right out,
Without consulting me.

I'll wrap up today with a poem from another book that is not about gardening. Always Wondering: Some Favorite Poems of Aileen Fisher, written by Aileen Fisher and illustrated by Joan Sandin, is a collection of 80 poems organized around the themes Think about People, Suddenly, Such Things as These, and Whoever Planned the World.

Package of Seeds
by Aileen Fisher

They can't see their pictures,
they can't read the label--
the seeds in a package--
so how are they able
to know if they're daisies
or greens for the table?
It sounds like a fancy,
it sounds like a fable,
but you do the sowing,
the weeding, the hoeing,
and they'll do the knowing
of how to be growing.


That's it for today. I hope you'll join me tomorrow for our next celebration.
Posted by Tricia at 12:01 AM