April 15th is World Art Day. Celebrated on Leonardo da Vinci's birthday, this day is designed to promote all forms of art and serve as a reminder that art is a symbol of free expression, multiculturalism, tolerance, and peace.

This is a good day to celebrate individual artists in poetry, as well as poetry about art. For last year's National Poetry Month project on poetic forms, I tackled Ekphrastic Poems and highlighted a number of poems inspired by works of art. For today's post I'd like to highlight the work of three poets, Margarita Engle, Carole Boston Weatherford, and Carmen Bernier-Grand, all of whom have written numerous poems about men and women in the arts.

The Poet Slave of Cuba: A Biography of Juan Francisco Manzano (2006), written by Margarita Engle and illustrated by Sean Qualls, is a biography in verse that uses alternating points of view to tell Juan's horrific and beautiful story. His first owner allowed both his parents to buy their freedom and she promised he would be freed upon her death. However, Juan Francisco remained a slave after Dona Beatriz’s death. Here is one of the early poems in the book.

Three hundred pesos, is it a lot?
I like to imagine that I already have enough
to buy them all
mother, father, unborn brothers and sisters
myself

Imagine
how it will happen
in just a few years
on the day
of her death
doesn't she wonder
how it feels to know that all I need now
is a swift ending for her
in order to make a sweet beginning for me? 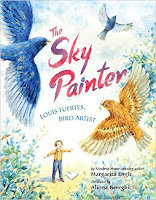 The Sky Painter: Louis Fuertes, Bird Artist (2015), written by Margarita Engle and illustrated by Aliona Bereghici, is a collection of poems about the life of Louis Agassiz Fuertes, the man known as the father of modern bird art.

When I am fourteen, I finally
have the chance to paint my first
brightly colored bird,
a red crossbill
with a funny beak.

I use a pen to sketch the outline
and watercolors to fill in the feathers.
Then I try adding more details
with ink, but my painting
starts to look muddy.

If I want to be a bird artist,
I can't get discouraged.
I need to practice.
I have to draw, draw, draw! 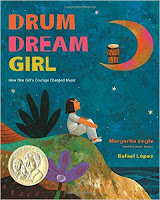 Drum Dream Girl (2015), written by Margarita Engle and illustrated by Raphael Lopez, is a book length free verse poem inspired by the childhood of Millo Castro Zaldarriaga. Born in Cuba in the 1920s, she was drawn to drumming, a tradition which did not include women. Here is an excerpt.

At home, her fingertips
rolled out their own
dreamy drum rhythm
on tables and chairs ... 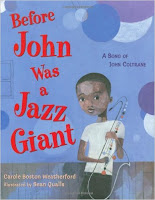 Before John Was a Jazz Giant: A Song of John Coltrane (2008), written by Carole Boston Weatherford and illustrated by Sean Qualls, is a book-length poem that explores the influence of music on Coltrane's life long became he became famous. He listened closely to the world around him and exercised and amazing gift for hearing and creating music. Back matter includes information about Coltrane's life and work, as well as a list of some of his most well known recordings.

Before John was a jazz giant,
he heard hambones knocking in Grandma's pots,
Daddy strumming the ukulele,
and Mama cranking the phonograph.

Before John was a jazz giant,
he heard steam engines whistling past,
Cousin Mary giggling at jitterbuggers,
and Bo-jangles tap dancing in the picture show.
Poem © Carole Boston Weatherford, 2008. All rights reserved. 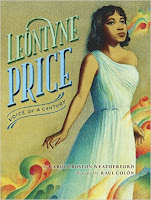 Leontyne Price: Voice of a Century (2014), written by Carole Boston Weatherford and illustrated by Raul Colon, is a lyrical picture book biography of the African American opera singer.

1927. Laurel, Mississippi.
The line between black and white
Was as wide as the Mississippi River was long.
All a black girl from the Cotton Belt could expect
was a heap of hard work—as a maid, millworker, or sharecropper.
Her song, most surely the blues.

Becoming Billie Holiday (2008), written by Carole Boston Weatherford and illustrated by Floyd Cooper, is a fictional verse memoir that tells the story of Holiday's life from birth through age 25. The poems carry titles from Billie’s songbook. The writing is tender and vivid, matter-of-factly portraying the ups and downs that dominated the singer's life. 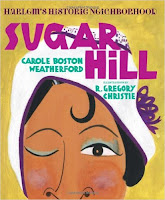 Sugar Hill: Harlem's Historic Neighborhood (2014), written by Carole Boston Weatherford and illustrated by R. Gregory Christie, is a ryhming book length poem about the neighborhood so many artists called home. Referenced in the text are musicians, artists, entertainers, writers, and more.  Back matter provides additional information about figures highlighted in the text and illustrations, including Duke Ellington, Count Basie, Faith Ringgold, Zora Neale Hurston, and others.

SUGAR HILL, SUGAR HILL WHERE LIFE IS SWEET
and the NEIGHBORS smile at all they greet. 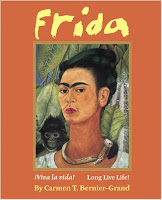 Frida: ¡Viva la vida! Long Live Life! (2007), written by Carmen Bernier-Grand with paintings by Frida Kahlo, is a collection of 26 poems that capture Kahlo's strength in the face of adversity, her passion, and the poignant experiences that marked her life. Here is a poem describing an early event that shaped her life.

I am a wounded hummingbird
caged in my room for nine months
with polio, crippling polio.

Warm towels soaked in walnut water
ease the pain in my leg,
a thin, drying twig.

I hide in the walnut wardrobe,
put on a white sock,
another on top,
and another.
Is the right leg as fat as the other?

The cage opens.
Now I have wings.

Diego: Bigger Than Life (2009), written by Carmen Bernier-Grand and illustrated by David Diaz,  is a collection of 34 poems about Diego Rivera that highlight the unmistakeable connection between his passionate, controversial life and his art. Here's a poem that describes his art.

As naturally as I breathe,
I painted in grand scale the colors of Mexico—
clearer, richer, more full of light than colors in Europe.

As naturally as I speak,
I painted in grand scale the music of Mexico
in markets, crowds, festivals—
Burning of the Judases, the Dance of the Deer.

As naturally as I sweat,
I painted in grand scale the workers of Mexico
in fields, mines, streets—
Indians carrying bundles of calla lilies.

A million public walls
wouldn't be enough
to paint all the beauty of Mexico. 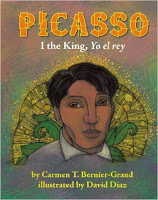 Picasso: I the King, Yo el rey (2012), written by Carmen T. Bernier-Grand and illustrated by David Diaz, is a collection of 40 poems

"God is really another artist.
He invented the giraffe, the elephant, and the cat.
He has no style. He just keeps trying other things."
Picasso paints late into the night, an owl his only companion.

An old wicker basket becomes the ribs of a goat.
A bicycle seat becomes a bull's head, the handlebars it horns.
Claude's toy cars become the head of Baboon and Young.
Picasso seldom titles his works.
Others do.
He has stopped signing his art.
What for? He knows who has done them. 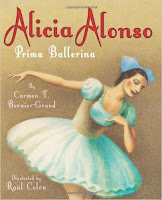 Alicia Alonso: Prima Ballerina (2011), written by Carmen Bernier-Grand and illustrated
by Raúl Colón, is a free verse biography of the Cuban dancer. In more than 30 poems, Bernier-Grand shares the achievements of Alonso, despite the difficulties that marked her life.

December 1932
* * *
Alicia's first solo--
a bluebird spinning
and fluttering in a light,
airy flight.
A dance for Princess Aurora
who has been asleep for a hundred years,
and for the prince
who has woken her up with a kiss.

I promised to highlight three poets today, but there is just one more book I must share.

Self-Portrait With Seven Fingers: The Life of Marc Chagall in Verse (2011), written by J. Patrick Lewis and Jane Yolen, is a collection of 14 poems (named for the art by Chagall) about the artist's upbringing. The text is paired with reproductions of Chagall's paintings, as well as a few photographs. In addition to the poems and images is a nonfiction narrative describing the events in the poems. Here are two poems from the book.

I and the Village

I hailed a milkmaid standing on her head
I saw a cow a-milking in a cow's head
I watched a peasant off to canvass tillage
I met the very universe in a village
I spied a blossom sprig, a tree of life
I loved Vitebsk in glory and in strife
I scanned a multitude of images, with mirror
I etched a dream and strove to make it clearer
I solved the riddle imagined by a child
I sketched a field, geometry gone wild
I knew myself, white lips, my face in green
I drew the cow's contentment in between

There is no arguing with soldiers,
no pleading while wearing the yellow star.
There is only escape: on the rails, in the air,
on foot across the mountains, one by one by one,
leaving behind the camps where men in stripes
and women with shaved heads,
and the children—never forget the children—
rock to and for with G-d's name on their lips.
So you leave behind the bistros of Paris,
soldiers lurking in every corner of the city;
leave behind a lifetime of work,
paintings of Vitebsk on every wall.
But Death, that old leveler,
can find you wherever you go,
even on a sledge pulled by a rooster,
even as you rise into the darkling skies.