My son's class has been studying apples for the last two weeks. The unit culminates on Friday with a big celebration. Since Friday (September 26th) is Johnny Appleseed's birthday, it is only appropriate that this is the day they devote entirely to apples.
I received a copy of Jane Yolen's new book, Johnny Appleseed: The Legend and the Truth, in the mail today. I suppose I should wait until Friday to write this, but since I want to put the book in the hands of my son's teacher for their big day, I'm highlighting this extraordinary work now.

How about we play a game of "fact or fiction" before we begin? Let's see how much you know (or think you do) about Johnny Appleseed. 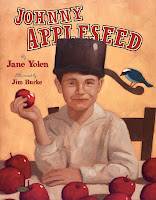 Who was Johnny Appleseed? Legends and tall tales abound, but when it comes to separating fact from fiction, answers aren't always easy to find. In Johnny Appleseed: The Legend and the Truth, written by Jane Yolen and illustrated by Jim Burke, Yolen explores the myth and brings some of that elusive truth to light.

Accompanied by a full page illustration (sometimes a double-page spread) is what looks like a page from a book. Each of these "pages" contains a portion of a poem on Johnny Appleseed, as well as a lyrical telling of Chapman's story. This section is labeled The History. Along the bottom of each page is a third bit of information in a section labeled The Fact. This last section expands on the history presented on the page. Here is how the poem begins.

Apple blossoms
Tap the sill,
Welcome baby
With a will,
Johnny, Johnny Appleseed.

Comes from a line
Of apple men,
Who sow and grow
And crop and tend.
Johnny, Johnny Appleseed.

The history section describes Chapman's birth, his early life (his father did fight in the Revolutionary War), education and apprenticeship (to a local farmer where he worked in the fields and with apple trees). As a grown man, Chapman converted to the Swedenborgian religion and became a missionary, spreading the word of God and apple seeds. Chapman began planting seeds in Pennsylvania. From his orchards he sold seedling trees to families moving west. When Pennsylvania became too crowded, he too went west, planting trees in Ohio and Indiana. Chapman never married, living most of his life alone, though he did spend some time with his half-sister Persis and her family. Here is how The History concludes.

Johnny looks like a poor old peddler,
but perhaps that is part of a plan,
for when he travels, he often
carries a great deal of money.
And then one day, going to Indiana
through the cold and rain,
he hears that cows have broken
through one of his orchard fences.
He walks fifteen miles to fix it.

Chapman contracts pneumonia and dies, having been a tireless farmer who lived nearly 71 years.

The story of Chapman told in these pages is one that is both fascinating and inspiring. The reading was enhanced tremendously by the facts that accompany the history. For example, readers learn that Chapman actually left much property when he died. He owned a gray horse, 15,000 apple trees and 2,000 seedlings in orchards in Indiana and Ohio (800 acres), as well as two town lots. However, the facts tell us that most of his estate was eaten up by bills and a greedy lawyer. In the end, his half-sister received only $165.95.

The first time I read the book through, I focused only on the poem, which I greatly enjoyed. The book could even be read this way with small children. The illustrations are stunning and quite nicely support and extend the poem and history. A pair of hands holding apple seeds is pictured against the backdrop of American quilt patterns. The opposing page features this piece of the poem, "Planting trees/Is quite an art./He plants the apples/With his heart./Johnny, Johnny Appleseed." The history section describes Chapman's early planting efforts.

The book ends with a note entitled Everyone Loves a Legend. In it, Yolen describes some of the legends that have arisen from Chapman's story, highlighting some of the more fanciful ideas. In it she says:

Legends are like that. They take over the real life story. But John Chapman--Johnny Appleseed or Appleseed John, as he was alternately called--led a life that was in some ways even greater than the legends.

Yolen has done much in this book to help readers understand and appreciate the real truth about John Chapman and his legacy. This is a beautiful book both in word and illustration. It deserves a place on your bookshelf and in your study of apples, legends, and American heroes. I highly recommend it.