On his web site, Steve Jenkins has this to say about science and wonder.

My own view is that the more we understand about what the universe is and how it works, the greater our appreciation of the beauty and wonder of the world, of each other, and of being here to think about it all.

This perspective permeates every book he creates. His latest, Down, Down, Down: A Journey to the Bottom of the Sea, treats readers to the wonder of the world's oceans. 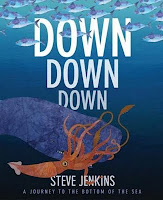 How much do we really know about the earth's oceans and the creatures that live there? The answer is, not much. Jenkins, however, shines a light on a topic sorely in need of treatment at the elementary level. If the illustration of the sperm whale eating a giant squid on the cover doesn't pull kids in, then surely this introduction will.

Viewed from space, the earth looks like a watery blue ball. Oceans cover more than two-thirds of the globe's surface, and well over half the planet lies beneath water more than a mile (1 1/2 kilometers) deep. We have explored only a small fraction of the oceans. In fact, more humans have walked on the moon than have visited the deepest spot in the sea.

Jenkins' tour of the oceans begins at the surface and ends in the Marianas Trench. Each double page spread contains a paragraph (or two) of information about that particular depth, illustration of the inhabitants, and a depth meter. The depth meter appears on the right edge of each spread and extends from the top of the page (the surface) to the bottom (deepest spot in the ocean). The depth is marked with what looks like a red push-pin and is labeled with the distance below sea level (in both feet and meters) and the temperature (in both Fahrenheit and Celsius).

In clear, concise text, Jenkins takes us on an unbelievable, fact-filled journey. Here are some of the interesting things you'll learn along the way.
The illustrations of the creatures, from the beautiful and familiar to strange and exotic (weird!), are gloriously rendered. (See images here, here and at this terrific review at Seven Imp.) At the end of the book are five full pages of background information on the animals in the book. Each section includes a diagram that shows the size of each creature compare to an adult human's body or hand. The final page includes a brief bibliography and another depth meter that shows how deep humans and sea vessels can descend.

Jenkins opens the door to the wonder of the ocean depths and its inhabitants in a way that no book I've seen has done before. This is a terrific addition to Jenkins expanding body of work, and a must-have for libraries and classrooms where biomes, oceans, food chains, or animal adaptations are studied. Highly recommended.
Book: Down, Down, Down: A Journey to the Bottom of the Sea
Author/Illustrator: Steve Jenkins
Publisher: Houghton Mifflin Books for Children
Publication Date: May, 2009
Pages: 40 pages
Grades: 2-7
ISBN: 978-0618966363
Source of Book: Personal copy.
This post was written for Nonfiction Monday. Hosting this week are the folks at Wild About Nature. Do take some time to check out all the great posts highlighting nonfiction this week.

Other Reviews
Posted by Tricia at 12:01 AM