I'm always looking for books that highlight the importance of math in our lives. Sometimes kids need help in seeing just how useful a working knowledge of math can be. At other times they need convincing that they will actually use their math know-how every day. I am happy to report that I now have a new book to add to the shelf alongside Math Curse (written by Jon Scieszka and illustrated by Lane Smith) and Missing Math: A Number Mystery (written and illustrated by Loreen Leedy). 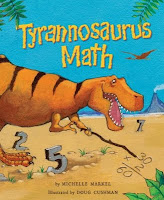 Tyrannosaurus Math, written by Michelle Markel and illustrated by Doug Cushman, is the story of a T. Rex who sees the world mathematically. From the moment he breaks from the egg he begins counting his fingers and toes. Much impressed by this, his mother names him Tyrannosaurus Math.
The math that T-Math sees in the world around him begins easily enough with some simple addition sentences. Then he moves on to skip counting, adding and subtracting using the standard algorithm, and the inverse nature of these operations.

Okay, I know some of you have already begun doubting this premise and are wondering if the book is too contrived or too didactic to be of value. I assure you that this is a fun story that doesn't get bogged down in the math. Here's an example of how the math is integrated into the story.

As the tyrant lizard grew and grew, his math skills became greater and greater.

At his full size, nothing was scarier than the sight of T-Math thundering through the forest, chewing on a problem in his head.

His mind was a sharp as his teeth, and he totaled them every chance he got.

This excerpt from pages 14-15 is found on a double-page spread in which T-Math is looking at his reflection in the water, jaws open wide and snarling. In a thought bubble above his head is a multiplication problem that looks like this.

Because the math appears in the illustrations, sometimes written in the dirt, sometimes in thought bubbles, it never feels obtrusive. The illustrations by Cushman are marvelous, adding both math and amusement to the story.

T-Math continues to use a range of more sophisticated math skills as the story progresses, eventually using his knowledge to save the day. Upon seeing this his sister remarks, "Who knew math could be so useful?" To which his brother replies, "You'll have to teach us more of your tricks."

The final page of the book is titled Tyrannosaurus Math Skills. Here readers will find a list of all the ways T-Math uses math throughout the story, accompanied by explanations and page numbers.

I read this one with my 8-year old, a self-proclaimed dinosaur nut. He enjoyed the story and even tried out some of the math "problems" on his own. He also recognized that there was math in the story he hadn't learned yet. Overall, I found this to be a charming read that emphasized the importance of math and its utility in our lives. This book is a necessity for elementary classrooms and school libraries.
Book: Tyrannosaurus Math
Author: Michelle Markel
Illustrator: Doug Cushman
Publisher: Tricycle Press
Publication Date: July, 2009
Pages: 32 pages
Grades: K-3
ISBN: 978-1582462820
Source of Book: Copy received from publisher.
Posted by Tricia at 8:40 AM