When I was young the photographs of Ansel Adams utterly captivated me. It was his images that had me dreaming of one day visiting the National Park System out west. While Ansel Adams was a pioneer in photographing these areas, he was preceded by the artist Thomas Moran. 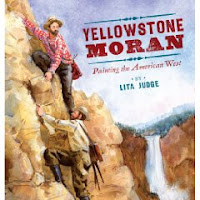 Yellowstone Moran: Painting the American West, written and illustrated by Lita Judge is the story of how Thomas Moran, one of America's greatest landscape artists, came to paint Yellowstone. It begins this way.

TOM MORAN had dreams as big as the Montana sky.
He stood in a camp in the heart of the Rocky Mountains, waiting nervously. Though Tom knew the men in the camp were scientists, they looked more like bandits. They eyed him suspiciously. He worried he must look like a greenhorn, but he wasn't about to admit that he had never ridden a horse, never shot a gun, and never slept in the open air.

The year was 1871. Tom Moran was not an outdoorsman by any stretch of the imagination, but he was determined to see and paint places that few others had seen. On his first day in the saddle he was so sore he was forced to put a pillow beneath him. However, dreams of seeing mud volcanoes, spouting geysers, and a great canyon kept him moving forward. The friendship he formed with the team's photographer, Will Jackson, kept him thinking about his art and the stories they could tell with their pictures.

The team, led by Dr. Hayden (then director of the USGS), set off on their journey into Yellowstone on July 1st. Given the rugged terrain, they often advanced only a few miles each day. On the 21st of July they entered territory that was new and strange. They found hot springs that stunk of the smell of sulfur. While the scientists spent their time studying the minerals of the hot springs and recording temperatures, Tom sketched and drew with pencil and watercolor, trying to capture the strange beauty of their surroundings. The team pushed on until they reached a waterfall and a huge gorge. While the rest of the team moved on to travel along the rim of the gorge, Tom and Will stayed behind and made the perilous trek to the bottom of the gorge so that they might paint and photograph from the best possible angles. After a few days, they hurried upriver to rejoin the rest of the team who were encamped on the shore of Yellowstone Lake.

Moran's journey into Yellowstone ended later at Firehole Basin, where he sketched mud cauldrons and geysers, including one so predictable it was named Old Faithful. When the expedition was over, Moran began to work on a painting of the canyon that was fourteen feet wide and seven feet tall. A reproduction of this work, entitled The Grand Canyon of the Yellowstone, graces the final spread of the text. (Visit Artchive to see the full image.)

During the winter following his trip out west, Dr. Hayden showed some of Moran's sketches and paintings to Congress and the president. As a result, President Grant signed a bill on March 1, 1872 making Yellowstone our first National Park.

I had never heard of Thomas Moran before reading this book. Now I want to know more! Judge has masterfully told his tale in both text and illustrations. She has created field sketches and journal entries as inserts on the pages to mirror the work that Moran did. However, it is her watercolors that capture the grandness of the landscape, in the same manner that I imagine Moran's early work did. Stunning is not too strong a word to describe them.

The book ends with an author's note about Judge's inspiration for the book, as well as the sources she used to craft her text and illustrations. A bibliography is also included.

This is a fascinating biography of a talented and determined artist. It's also a fresh look at the American west. Recommended with enthusiasm.

You can learn more about Thomas Moran and his work at the National Gallery of Art and the National Park Service.
Posted by Tricia at 9:16 AM