While I dutifully studied history and memorized dates, names and places in high school and college, it wasn't my favorite subject. That's unfortunate, because history learning should be filled with STORY. I suppose that's why I was so enamored of Schoolhouse Rock. The videos combined music and story in a way that made me want to know more. Here's an example. 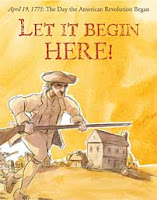 What gets lost in all these accounts, whether cleverly told in song or written in textbooks, is the story of the people involved (some might say the little people), and absolute horror that is war. Let It Begin Here!: April 19, 1775, The Day the American Revolution Began, written and illustrated by Don Brown, puts readers on the Lexington Green with the militia, facing a column of regulars (redcoats) three times their size. Brown puts a human face on the events of that day, tracing the skirmishes at Lexington, Concord, Meriam's Corner, Bloody Curve, and Menotomy (today's Arlington). When the regulars finally reached the safety of waterfront and a nearby British warship, the "road between Charlestown and Concord lay strewn with dead men and horses. Seventy-three redcoats died and 174 were wounded. The Yankees suffered 49 dead and 39 wounded."

It is this day, these events, this start to the war that Brown has described so clearly. It's not an easy story to read. The pictures are filled with the bloody imagery of war--bullets fly through victims from both sides, members of the militia are bayoneted by the regulars, a redcoat is killed with a hatchet. War is not pretty or romantic. It's an ugly thing. Brown has managed to capture these notions in his illustrations without too much gory detail.

While the illustrations on every page help bring the story to life, it is the well-written text that pushes readers forward through the story. The events unfold slowly, but once the fighting begins the story is riveting, and even though we all know how it turns out, a bit unbelievable. The militia assembled on Lexington Green are small in number and led by a man dying of tuberculosis. When dawn arrived, so did the regulars. Spectators gathered around the edges of the green. No one knows who fired the first shot, but that one shot signaled the assembled to begin firing. Before long the green was filled with smoke from the muskets. As that battle ended, here's what happened next.


They left the dead and grieving of Lexington. But as the regulars marched the six miles to Concord, thousands of militiamen from surrounding towns rallied. The lanthorns Revere had shone hours earlier had set in motion alarm riders, signal shots, and beacon fires that had spread the call to arms everywhere.

It wouldn't be an overstatement to say that the events in the book are pulse-pounding. I began racing through the text to see what would happen next.

In an interview in SLJ, Brown had this to say about the book.


We're connected to the past by a shared humanity. You can make a 21st-century connection to a loss in the 18th century because you're human. It doesn't matter if it's the Babylonian War or the Revolutionary War. [The events have a] greater impact if you use people to tell the story. The Battle of Lexington and Concord is well documented. You can put names and faces on the people involved. The man who dies on his own stoop in front of his wife and children [in Let It Begin Here!]—that's pretty rough stuff.

This is exactly why I loved this book. The battles at Lexington and Concord ARE well documented, but it's Brown's focus on the individuals involved that makes this book so compelling.

I have only focused here on the day of the battles, but Brown provides several pages of introduction that describe how the colonists got to this point in the first place, as well as a page of resolution that describes what happened to the individuals who took part in the events on April 19th. There is also a bibliography at the end of the book. I found myself wanting only two things from this book that I didn't get--page numbers (why are so many nonfiction picture books without them?!) and a map. Oh how I would have loved a map (even on the endpapers) to trace the path of the day's events.

This book would make a terrific read aloud for 4th and 5th grade students studying the Revolutionary War. Heck, I even think middle school students would be moved by the tale Brown tells. Pair this with the poem Epitaph for a Concord Boy by Stanley Young, found in Lee Bennett Hopkin's anthology America at War.

Did I mention that I loved this book? Highly recommended.

This post was written for Nonfiction Monday. Hosting this week is Roberta at the blog Wrapped in Foil. Do take some time to check out all the great posts highlighting nonfiction this week.
Posted by Tricia at 9:13 AM