April 8th is Draw a Bird Day. It is celebrated "as a way to express joy in the very simplest of things in life and as a way to help soldiers everywhere forget war and suffering even if only for a short time." Do visit the web site to read the story behind this day. Then draw a bird, share it, and spread a smile.

In thinking about birds today, I'm sharing snippets of poems in a form borrowed from Wallace Stevens. You'll recognize it as Thirteen Ways of Looking at a Blackbird.

Thirteen Ways of Looking at Birds

I.
A thrush is thrilling as I write
Its obligato of delight;
And in its fervour, as in mine,
I fathom tenderness divine,
And pity those of earthy ear
Who cannot hear . . . who cannot hear.

From Why Do Birds Sing? by Robert W. Service

II.
A bird sang sweet and strong
In the top of the highest tree,
He said, "I pour out my heart in song
For the summer that soon shall be."

III.
Three lovely notes he whistled, too soft to be heard
If others sang; but others never sang
In the great beech-wood all that May and June.
No one saw him: I alone could hear him

From The Unknown Bird by Edward Thomas

IV.
The free bird thinks of another breeze
and the trade winds soft through the sighing trees
and the fat worms waiting on a dawn bright lawn
and he names the sky his own

From Caged Bird by Maya Angelou

V.
A lone gray bird,
Dim-dipping, far-flying,
Alone in the shadows and grandeurs and tumults
Of night and the sea
And the stars and storms.

From From the Shore by Carl Sandburg

VI.
A bird came down the walk:
He did not know I saw;
He bit an angle-worm in halves
And ate the fellow, raw.

VII.
I wonder if God's helper on that fifth day—
making all the birds of air—
was so new to the business of creation,
he approached it with little care.

From Creation of the Marbled Godwit by Jane Yolen
in Birds of a Feather, poems by Jane Yolen and photographs by Jason Stemple

VIII.
In the sedge a tiny song
Wells and thrills the whole day long
In my heart another bird
Has its music heard.

IX.
A bird is a bird as long as it is
there.  Then it is a miracle our crumbs and
sunflower seeds caught and let go.

X.
I gave much credence to stragglers,
overrated the composure of blackbirds
and the folklore of magpies.

XI.
The birds are heading south,
instinct is the oldest story.
They fly over their doubles,
the mute weathervanes,
teaching all of us
with their tailfeathers
the true north.

From The Birds by Linda Pastan

XII.
From dawn to dusk in darkling air
we glean and gulp and pluck and snare,
then find a roost that's snug and tight
to brave the long and frozen night.

XIII.
Now close the windows and hush all the fields;
If the trees must, let them silently toss;
No bird is singing now, and if there is,
Be it my loss.

From Now Close the Windows by Robert Frost


John Muir Laws has some terrific resources for drawing from nature. Check out the Drawing Birds Tutorial. (Teachers can download a high resolution PDF for use in their classrooms.) 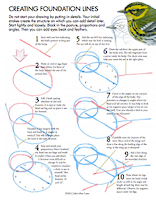 I also found this How to Draw A Bird page from easy-drawings-and-sketches.com to be helpful.

I've written about birds and poetry before. Check out A is for Avian, a post from my 2013 National Poetry Month Project.


That's it for today. I hope you'll join me tomorrow for our next celebration.
Posted by Tricia at 12:01 AM