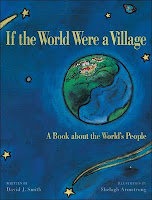 I've been a trainer for Population Connection for some time now. I like the emphasis their curricular materials place on understanding human impacts on the environment. They also strive to help kids understand really big numbers. In my professional development workshops I always bring along the book If the World Were a Village: A Book About the World's People. Written by David J. Smith and illustrated by Shelagh Armstrong, this book imagines the population of the world as represented by a village of just 100 people.

First published in 2002, the text was updated in 2008 to reflect new population statistics. Here's how the book begins.

Numbers this big are hard to understand, but what if we imagined the whole population of the world as a village of just 100 people? In this imaginary village, each person would represent 67 million (67,000,000) people from the real world.

Upon entering the global village, readers first learn about the people who live here and where they come from. Given the numbers in the introduction, it shouldn't surprise you that 61 of the inhabitants come Asia. In fact, more than half of the people in the village come from the 6 most populated countries.

The text continues by exploring the village in terms of languages spoken (21 speak a Chinese dialect, 9 speak English, 9 speak Hindi, and 7 speak Spanish), ages of inhabitants, religions (33 are Christians, 21 are Muslims, 13 are Hindus, and 15 are non-religious), schooling and literacy, money and possessions, and more. Beyond these pages that describe the backgrounds and circumstances of the villagers, I find those on the distribution of food, air and water quality, and availability of electricity to be the ones that generate the most discussion. For example, here's what readers learn on the page about food.

There is no shortage of food in the global village. If all the food were divided equally, everyone would have enough to eat. But the food isn't divided equally. So although there is enough to feed the villagers, not everyone is well fed:

50 people do not have a reliable source of food and are hungry some or all of the time.
16 other people are severely undernourished.

Only 34 people always have enough to eat.

You can see why these facts lead to so much discussion. It's difficult for many children to comprehend the lack of such basic necessities. 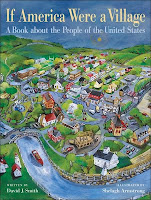 I am happy to report that Smith and Armstrong have followed up this work with If America Were a Village: A Book About the People of the United States. Since the U.S. hit 300 million in 2006, it seems only fitting that Smith tackle the subject in this manner. An author's note at the beginning confirms that the use of the word America for the purposes of the book refers only to the United States. Here's how it begins.

There are more than 306 million people in the United States today. This huge number is hard to imagine and even harder to analyze. And America never stays still--it is always changing and growing. There is 1 birth about every 8 seconds and 1 death about every 12 seconds, which means that 1 or maybe even 2, were added while you were reading this paragraph.

To find out more about America and Americans, we are going to reduce the whole population of America to a village of 100 people, the imaginary village you see here. Each person in this village of 100 will represent more than 3 million Americans in the real world.

I was interested to see how the American village numbers compared to the global village. Here's what I learned.
Other topics explored include family structure, employment, age, wealth, energy and water use, and health. In many cases the American village numbers are compared to the global village for some perspective (and perhaps a bit of humility and gratefulness). As with the first book, there is an extensive endnote on helping children understand American, as well as a note on sources.

In both books, Armstrong's illustrations are bright and colorful. The images in the newest book focus more on people and faces than the first, but given the diversity of the global village, this is an understandable choice. Since the the second book is about a topic closer to home, it also makes more sense to focus more heavily on the people.

Like its predecessor, this new book does an admirable job of making large numbers understandable for kids. The facts will provide fodder for discussions and will leave young people and their teachers with much to think about. For use in math, science, and social studies instruction, I highly recommend both titles.

If you would like some additional materials to support your use of these books, check out these resources.
Finally, check out this video excerpt from If the World Were a Village. It will give you a feel for the wonderful illustrations and the content of the text.

Book: If America Were a Village: A Book About the People of the United States
Author: David J. Smith
Illustrator: Shelagh Armstrong
Publisher: Kids Can Press
Publication Date: August, 2009
Pages: 32 pages
Grades: 3-8
ISBN: 978-1554533442
Source of Book: Review copy received from Raab Associates.
This post was written for Nonfiction Monday. Hosting this week is Diane Chen from Practically Paradise. Do take some time to check out all the great posts highlighting nonfiction this week.
Posted by Tricia at 1:45 PM