When I was 13 I began reading Agatha Christie novels. Around the time I read Death on the Nile, my uncle (and godfather) was living and working in the Middle East for Kodak. I still treasure the picture I have of him sitting on a camel in front of the pyramids at Giza. Together, these two things (the book and the picture) started my life-long love affair with all things Egyptian.

Today I regularly spend time in elementary classrooms in Virginia where young children (second graders) learn about the contributions of ancient Chinese and Egyptian civilizations and how they have influenced the present world in terms of architecture, inventions, the calendar, and written language. I'm thrilled to report I have a new book to share with them. 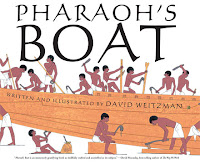 Pharaoh's Boat, written and illustrated by David Weitzman, tells the story of a miraculous find near the south face of the Great Pyramid at Giza and how it was ultimately reconstructed. The book begins with a Prologue that hints at a mystery beneath the sand. With a turn of the page readers are transported back to ancient Egypt to the time of Cheops death. While Cheops had prepared for his own death by building a pyramid to house everything he would need in the afterlife, there was still a task that remained to be done upon his death.

Djedefre, Cheops's son, succeeded his father as pharaoh, and his first concerns were the rituals that would assure his father's safe passage into the afterlife. He ordered the construction of two magnificent ships: one to guide Cheops safely through the dark, perilous underworld of night, and the other to carry him up across the sky to embark on his eternal journey with the sun.

What unfolds is a description of the importance of boats to the Egyptians and the utterly intriguing tale of how such boats were built. Here are just a few of the many things I learned.
The science behind the shipbuilding was amazing. Here's one of the most interesting things I read.

The rope lashing did more than just hold the hull together. When sewn ships like this were launched, the wood soaked up water like a sponge and expanded. At the same time, the rope shrank as it got wet, pulling the planks together and closing any little spaces between them to make the ship watertight.

I gained a tremendous appreciation for the work of these ancient shipbuilders in reading Weitzman's description of the process. I was not, however, prepared for what came next.

While Cheops's funerary ships were being finished, workers carved two pits--each a hundred feet long, eight feet wide, and eleven feet deep--out of solid limestone bedrock at the base of his pyramid.

As soon as the boats were completed, they were taken apart and placed in the pits.

What?! To say I was flabbergasted would be an understatement. In just a few pages of description and illustration I came to appreciate the beauty and craftsmanship in these boats. Taking them apart seemed like sacrilege.

The story of the building of Pharoah's boats ends with a description of their placement in the pits and the steps taken to protect them from tomb robbers. Weitzmans' book however, does not here. Readers are taken back to 1954 and the discovery of a boundary wall in an unexpected location. The workers continued to dig and found rows of limestone blocks where there should have been bedrock. The Egyptologist in charge of the work believed the blocks to be covering boat pits. With a bit more excavation he was proven to be correct.

The text goes on to describe the work of Ahmed Youssef Moustafa, the "chief of the Restoration Department of the Egyptian Antiquities Service, and the man chose to direct the recovery, preservation, and reconstruction of the huge ancient ship--an almost impossible task that no one had ever undertaken before." This section of the book is distinguished from the rest by modern (realistic) 3-D illustrations, while the portion of the book describing the work of the ancients is rendered in the flat 2-D style seen in hieroglyphs and tomb paintings. To get a feel for the artwork you can view some sample pages from the book.

I found the story of Moustafa's research and work to unravel the secrets of ancient shipbuilders simply fascinating. While Moustafa and his workers tried to unlock the secrets held in the pieces of the boat, they assembled and disassembled it FIVE times before they were satisfied they had it right. When the boat was finally installed in a new museum in 1970 near Cheops's pyramid, it took them only three months to assemble. You can see the piece in all its glory at the end of the text where a stunning gatefold opens to reveal the completed boat. (For some actual photographs of the boat, visit Mysteries of the Nile: Pharaoh's Boat (Solar Barque).)

The Afterword provided by the author describes efforts to recover the second boat buried underneath the one Moustafa put together.

If I sound a bit starry-eyed about this book it's because I am. I find the fact that shipbuilding techniques have remained largely unchanged in more than 4000 years to be simply amazing. Weitzman reeled me in on the first page and never let me go. When I reached the end I wanted to know more. Kids will undoubtedly feel the same. HIGHLY RECOMMENDED.

Book: Pharaoh's Boat
Author/Illustrator: David Weitzman
Publisher: Houghton Mifflin Books for Children
Publication Date: May, 2009
Pages: 32 pages
Grades: 3-8
ISBN: 978-0547053417
Source of Book: Personal copy.
This post was written for Nonfiction Monday. Hosting this week is Pam Coughlan, AKA MotherReader. Do take some time to check out all the great posts highlighting nonfiction this week.
Posted by Tricia at 9:42 AM