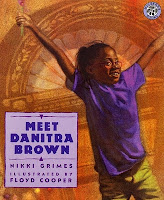 I met Nikki Grimes' (in print) the year I moved to Richmond. In 1994 we were lucky enough to have not one but three independent bookstores devoted to children's books. I was drawn to one with a particularly good poetry section, and it was there that I found Meet Danitra Brown and developed a healthy admiration for the work of Ms. Grimes.

I suppose if I could choose one word to describe her work it would be true. I love the honesty with which the everyday is described in anything but an ordinary way. And I'm often left breathless by the the emotion and love that ooze from her poems. Not sure what I mean? Here's an example from Oh, Brother!, a book that tells the story of two boys made brothers through their parents' marriage.

One night, we're nose to nose.
Fists tight, I glare at Chris.
No dragon breathes as hot as me.
I've had enough of this!

"Unless I'm perfect," whispers Chris,
"my dad might go away.
Normal wasn't good enough
to make my mama stay."

The sprinkler system in his eyes
switches on full blast.
The fiery anger in my heart
sputters . . . out at last.

My heart hurts every time I read this bittersweet poem of loss and acceptance.

Before we look at some more of Nikki's poetry, let's learn a bit more about her.

***************
How did you get started writing poetry? What got you hooked on children’s poetry?
Nikki: I've been writing since I was six, and I think my love of the genre was an outgrowth of my fascination with language, and my constant habit of doing word-play. I was never hooked on children's poetry, per se. I loved poetry, in general.

What are the things you enjoy most about writing poetry for children/young adults?
Nikki: The same thing I love about writing for children in general, which is that I can go straight to the heart of a matter. I enjoy creating literature that is accessible, and that kind of writing is particularly suited to young readers.

Who/what made you want to write?
Nikki: No one made me. I came out of the womb with that bent. I lived in story, lived by story. As I've said elsewhere, reading and writing were my survival tools.

Have you had any formal poetry training? If not, how did you learn to write what you do?
Nikki: I've attended writing workshops, but have had no formal training where poetry is concerned. I learned the forms by reading ravenously, and reading as a student of the genre, imitating the poetry that spoke to me most, until I found my own voice.

Can describe your poetry writing process?
Nikki: That is rather complicated, although I do explain it as much as possible in Out of the Dark, from the Authors at Work series.

Do you have a favorite among all the poems/poetry books you have written?
Nikki: No clear favorite, however, What is Goodbye? would rank high on my list.

Would you like to share the details of any new poetry project(s) that you’re working on?
Nikki: I'm working on a collection of tanka meditations (for adults, a novel in verse for tweens, and a new Dyamonde Daniel book. The rest, I'll keep under wraps, for now!

Your favorite place to write?
Nikki: A comfy leather chair a few feet from my bed.

Favorite quote on writing/poetry?
Nikki: When people ask Jane Yolen for the secret to her writing success, she answers "Butt in chair." I can't improve on that!

Your nominee for the next Children’s Poet Laureate?
Nikki: J. Patrick Lewis.

***************
I've got 13 books on the pile next to me, all hoping for their moment in the sun, each one speaking to me in some way. Since Nikki mentioned What is Goodbye? as one of her favorites (maybe), I'll start with it and the author's note that comes at the end of the book. Here's what she tells her readers.

There is no right or wrong way to feel when someone close to you dies. I found that out at fifteen when my father died. Some people cry right away, others don't. Some get angry, others don't. Some can talk about the person, while others find it impossible. Almost everyone asks why, but no one really has the answer. All we know for certain is that when someone we love dies, it hurts.

What is Goodbye? is the story of how two siblings, a brother and sister, surviving the death of their older brother. In alternating poems readers learn how Jesse and Jerilyn negotiate the grieving process in very different ways. Here are two poems on the subject of his name.

Mommy won't say Jaron's name
so I write it everywhere,
on the walls, my book, his chair.
If I'm punished, I don't care.
Let her take away my pens.
I'll write it on the air!

Once, I asked my mother
where she found
Jaron's name.
In Hebrew
his name means "to sing,"
which he did
in every room
of the house.
His bass,
sweet as chocolate,
melted through the walls
at all hours of the day
and night.
I might not miss him
half as much
if his silence
didn't ring
so loudly.

One of the things I love about this book, and many of Grimes' other works, is the strong sense of family. Anyone reading these can relate in some way to the familiar dynamics that are expressed. In reading Stepping Out With Grandma Mac I was catapulted back to my youth and began nodding and smiling in recognition as I found my grandmother on the page. How could that be? Perhaps that sharp tongue and gruff manner were generational. Do you suppose all women born in 1901 were so feisty? Or had to be? Here's a bit of one poem that makes me laugh. I can just see my grandmother's Evening in Paris bottle now!

Here she comes
Spritzing me with cologne
Five seconds after
I hit the door.
She's armed and dangerous
With a dainty, cut-glass
Perfume bottle that
Catches the morning light
And flings it against the wall

Friendship is also a central theme in Grimes' books. In Meet Danitra Brown, Zuri Jackson introduces readers to her best friend Danitra in a series of thirteen rhyming poems. Danitra is loyal, supportive, and always herself, even if that means being different. One of my favorite poems is from the third book about Danitra and Zuri, Danitra Brown, Class Clown.

School is in and I remember
How much I detest September:
New classroom I have to scout
New teacher to figure out
New and harder math to learn
(Numbers that make my stomach churn)
New bullies to face or fear
(Perhaps I should slip out of here)
But then, Danitra hops in, grinning
and all my gloomy thoughts go spinning.

I want to leave you with one last poem. You can find this one on page 2 of The 20th Century Children's Poetry Treasury, selected by Jack Prelutsky and illustrated by Meilo So.

"Sis! Wake up!" I whisper
in the middle of the night.

Urgently, I shake her
till she switches on the light.

The spiral notebook in my hand
provides her quick relief.

It tells her there's no danger
of a break-in by a thief.

"Okay," she says, then, props herself
up vertically in bed.

She nods for me to read my work.
I cough, then forge ahead.

The last verse of my poem leaves
her silent as a mouse.

I worry till she says, "We have
a genius in the house."

To learn more about Nikki and her work, consider visiting these sites.
Let's give a rousing cheer to Nikki Grimes for participating in the Poetry Makers series.

All poems ©Nikki Grimes. All rights reserved.
Posted by Tricia at 12:01 AM