I've been familiar with the nonfiction work of Stephen Swinburne for quite some time, so you can imagine how excited I was when his poetry book Ocean Soup – Tide Pool Poems was released this spring. I was beyond thrilled when I found he'd recorded a number of videos in which he recited poems from the book. They are amazingly creative and downright funny. Take a look.

Ocean Soup - Move over Mussel from Steve Swinburne on Vimeo.

Before we read more of Steve's poetry, let's learn a bit about him.

***************
How did you get started writing poetry? What got you hooked on children’s poetry?
Steve: In my teens, I devoured Walt Whitman. In college, a Gerard Manley Hopkins’ poem (Pied Beauty) knocked me off my feet. My grandmother, I called her Nan, loved to read and sip gin and say, “Two men looked out from prison bars, one saw mud, the other stars (a Frederick Langbridge quote). While working as a naturalist and park ranger after college, I read John Burroughs, John Muir and Thoreau. All of this lyrical language seeped into my bones. And when my daughter, Hayley, was born in 1988, I read Jane Yolen’s Owl Moon five times a week. Boom. I was hooked.

What are the things you enjoy most about writing poetry for children/young adults?
Steve: If a funny line or unusual image can turn kids onto critters such as sea urchins and Surinam toads and bowerbirds, I’m happy. With awareness, comes an urgency to safeguard and protect. I want to encourage an army of wildlife safekeepers. But I also get a real kick from making kids laugh. Can you think of a better job?

Who/what made you want to write?
Steve: Even though I grew up on the crowded city streets of north London, I always had an affinity for the natural world. By my junior year in college, they told me I have to pick a major. I couldn’t decide if wanted to major in biology or English. I loved natural history but I also loved literature and creative writing. I was the first student in the history of my college to receive what they called then a “contract” degree, a combined major of biology and English. So, what made me want to write? Life on planet earth.

Have you had any formal poetry training? If not, how did you learn to write what you do?
Steve: I’ve had no formal training. I wallow in the words of other poets and keep my ears open. Oh, and I write a poem a zillion times until it’s done.

Can describe your poetry writing process?
Steve: Fingers hover over the keyboard, brain chases down words, lassoing them like stray calves. Thesaurus, rhyming dictionary close at hand. If I get stuck, I push away from the desk – take a nap, eat some chocolate, take a walk. Shake the words loose. Return to the desk. And, to steal Ms. Yolen’s line, keep B.I.C. (Butt In Chair) until I’ve got something.

Do you have a favorite among all the poems/poetry books you have written? 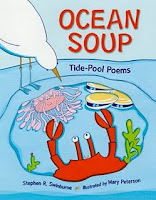 Steve: Ocean Soup – Tide Pool Poems. This book took about ten years to get published. I never gave up on it. So besides being a testament to persistence, Ocean Soup is a celebration of a fantastic habitat, ocean tide pools. Mary Peterson’s illustrations are a perfect compliment to the words. And I have a total blast reciting these poems during my school visits. I’ve developed a website for the book at www.oceansoupbook.com. It’s very satisfying to hear how much teachers and students around the country are enjoying the quirky videos of me reciting the poems in a tidepool.

The Recipe For an Ocean Soup by Steve Swinburne

Once a park ranger, always a park ranger. Fresh out of college, I worked as a National Park Service ranger. I loved “teaching” or interpreting natural history to park visitors.

One August almost ten years ago, our Vermont family piled into our beat-up Toyota Previa van and drove the 6 hours to the coast of Maine. We landed in a tiny coastal harbor in a village called Blue Hill. The rental cottage overlooked a narrow tidal inlet. We would be there for the week. E.B. White, the author of many books including Charlotte’s Web, Stuart Little and Strunk and White’s Elements of Style, lived at Brooklin, Maine, just up the road.

The tide pools at the edge of this little Maine cape would provide the inspiration for one of my children’s books many years later. A half-mile section of tide pools spanned our front yard, less than 100 feet from the deck of the rental house. At low tide, mid tide, high tide I would go exploring. I’m a Vermonter. We have no ocean. So this was like Disneyland for a naturalist.

I’d often take our two daughters, Hayley, 12, and Devon, 10, to investigate the pools. We’d creep over the rocks and peer into the still water. The life in the quiet salty pools fired my imagination. It was like looking into someone’s living room. Everyone was home: anemones, barnacles, starfish (now called sea stars), crabs, sculpins, sea urchins. For five days I watched their comings and goings, prying into their private lives. I scribbled notes. I took photographs. I stayed long after the girls got bored. I’d studied tide pool ecology in a Field Biology course in college a million years ago, so this felt like meeting up with old friends.

As a writer, you have to be ready for inspiration when it shows its face. We returned to Vermont, shook the sand out of our sneakers and stored our beach gear in the barn. And then every morning for the next two weeks I woke at 5 and went to my desk and wrote poems about tide pool creatures. I browsed field guides. I stared at the shells we’d collected. Sniffed the salty carcass of a sea fan. And with the promise to myself that I would keep B.I.C. (Butt In Chair) until I had something written, I began to hear the voices of the tide pool inhabitants.

I don’t know exactly how and when Ocean Soup became poems rather than straight nonfiction text, but the writing emerged as poems right from the start. And I knew that they had to be funny. I wanted the creatures to speak for themselves. A starfish with attitude. A sea urchin proud of it spines. A blue mussel tired of being pushed around. I envisioned the sculpin as Fagin in Oliver, and I just knew that Hairy Doris, a sea slug, was Mrs. Doubtfire.

I wanted Ocean Soup to work on two levels: poems that were entertaining and educational, and solid factual information that would enlighten and expand awareness about a beautiful and threatened habitat. Besides a glossary and further resources to explore, I wrote brief factoids about each critter.

Shortly after completing the book, I began “performing” some of the Ocean Soup poems in conferences around the country. They were so well received, I thought there might be an opportunity to take it further. During a conversation with my savvy and tech-loving nephew, an idea was born to videotape me performing the poems in an actual tide pool. So on a warm weekend in late August, we drove three hours to Odiorne Point in Portsmouth, New Hampshire.

The filming of the Ocean Soup videos was a total blast. My wife, Heather, held the cue cards and boom microphone and my nephew, Sasha, filmed the action with a HD digital camera. I dressed as a pirate, an English school boy, a well-endowed hussy, a nightclub performer. I poked around thrift shops and found a dapper white and blue seersucker jacket. We filmed in morning and late afternoon light. The staff at the Seacoast Science Center were a great help suggesting locations to shoot and even providing us with some “tame” tide pool critters.

I feel like this book, these poems have taken on a life almost all their own. I love Mary Peterson’s colorful and playful illustrations. They complement my text perfectly. And to cap it all off, I’m very proud of the dynamic and whimsical website we’ve developed at www.oceansoupbook.com. So from the first time I peered into a marine tide pool all those years ago to the creative energies I poured into the writing, performing and promoting of the tide pool poems, what a long, fun trip it’s been.

Would you like to share the details of any new poetry project(s) that you’re working on?
Steve: I’m writing a second book in the Wiff and Dirty series. Here’s what Kathi Appelt said about Wiff and Dirty George-The Z.E.B.R.A. Incident, “Like jumping down the rabbit hole, complete with mad scientists, a princess, and a crazy mastermind, not to mention rabbits. The fate of the queen and all of England are in the hands of two unlikely heroes, Wiff and Dirty George, and their three-foot-long Madagascan worm.” —

And I’m working on a new collection of poems called Poop Poems. If any acquiring editors are reading, these poems are for sale.
Here’s a taste (sorry!):

MEGA PLOPS
Once a Tyrannosaurus stopped
And ate some Stegosaurus chops,
At the perfect place the T-Rex dropped,
A steaming pile of mega-plops!

Your favorite place to write?
Steve: At my desk on a summer morning with the study windows thrown wide open. But, as soon as I get my iPad, it may be with iPad under the apple tree out back.

Favorite quote on writing/poetry?
Steve: "Two men look out from prison bars, one sees mud, the other stars."

Your nominee for the next Children’s Poet Laureate?
Steve: I’m just glad I’m not on the nominating committee. Way too many good ones out there. Good luck.

***************
I am quite enamored of Ocean Soup, not just for the poems and their playfulness, but also for the short nonfiction bits that accompany them. Here's the text that accompanies the poem "Move Over, Mussel."

Mussels are filter feeders with two siphons, or tubes. One tube sucks water and plankton in, and the other spews water and waste out. Mussels filter about ten to fifteen gallons of water per day. They anchor themselves to tide-pool rocks with tough, sticky threads made my a gland in their foot.

Before moving on, I must share at least one more poem and video. This gender-bending poem is "Hairy Doris."

Steve has also written several picture books in rhyme. When my son was young he loved the book Safe, Warm, and Snug, which described how animal parents protect their young. The back matter in this book briefly describes the strategies used by each of 2 animals (cichlid, kangaroo, cockroach, killdeer, sloth, Emperor penguin, Surinam toad, African rock python, sea horse, tumblebug, and bat). Here are two of the verses.

Baby sloth hangs on her back,
As mother walks, slow and slack.
Baby clings with long curved toes,
While prowling jaguar comes and goes.

To learn more about Steve, check out these sites.
Many, many thanks to Steve for participating in the Poetry Makers series.
All poems © Stephen Swinburne. All rights reserved.
Posted by Tricia at 12:01 AM