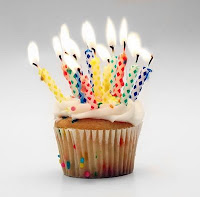 Today author and poet Ron Koertge is celebrating a birthday. This then, is the perfect day to celebrate him and his work. Ron Koertge (pronounced KUR-chee) wasn't even on my radar (shame on me!) until a few months ago when I was asked to participate in a blog tour for his new book, Shakespeare Makes the Playoffs. I generally don't write about YA books, but when I learned his book was about baseball and poetry, I couldn't say no. Since then I've read just about everything of Ron's I could get my hands on--poetry, verse novels, fiction--and let me tell you, I've had a blast. Much of his adult poetry is worth sharing with young adults. Here's a poem you can find in The Poets' Grimm: 20th Century Poems from Grimm's Fairy Tales, edited by Jeanne Marie Beaumont & Claudia Carlson.

said she didn't know anything about ovens
so the witch crawled in to show her
and Bam! went the big door.

The she strolled out to the shed where
her brother was fattening, knocked down
a wall and lifted him high in the air.

Not long after the adventure in the forest
Gretal married so she could live happily.
Her husband was soft as Hansel. Her
husband liked to eat. He like to see
her in the oven with the pies and cakes.

Ever after was the size of a kitchen.
Gretel remembered when times were better.
She laughed out loud when the witch
popped like a weenie.

"Gretel! Stop fooling around and fix
my dinner."

"There's something wrong with this oven,"
she says, her eyes bright as treasure.
"Can you come here a minute?"

Before we look at some of Ron's work, let's learn a bit more about him.

***************
How did you get started writing poetry? What got you hooked on children’s poetry?
Ron: Like a lot of people, I got started writing poetry in high school. That’s when I thought poetry was a public dump for tumultuous feelings. The more I read, though, I saw that poetry was written by people who liked to fool around with words. I also went off the beaten academic path and read guys like Edward Field, a poet who made me laugh. And I don’t really write children’s poetry like Jack Prelutsky or Shel Silverstein. (I wish I could!) Books like The Brimstone Journals and even Shakespeare Bats Cleanup and its sequel Shakespeare Makes the Playoffs aren’t for children. Young readers, yes; children, no.

What are the things you enjoy most about writing poetry for children/young adults?
Ron: There’s something very cool about being able to get a good rough draft for a poem in three or four hours of work. I write fast, but not well. Not at first, anyway. And it’s fun for me to go through three or five or eight drafts of a poem. I like to watch it change and muscle me into where it wants to go instead of where I think I want to take it. Some people like to drive poetry around. I like to be poetry’s passenger.

Who/what made you want to write?
Ron: I had a teacher or two in high school who encouraged me to write. But I knew when I was 18 or 19 that writing was the only thing I was really any good at. I was a so-so jock and an average musician, but I was pretty sure I could be a better-than-average writer.

Have you had any formal poetry training? If not, how did you learn to write what you do?
Ron: I took creative writing classes and sat in writing workshops. I learned things but I’m the kind of guy who hears about a rule and then immediately tries to break it to see what will happen. So if someone said, “Don’t use adjectives” I’d use a whole bunch of them. If someone said, “All full-rhymes are musical” I’d try to make music using slant-rhyme.

Can describe your poetry writing process?

Ron: For a hard-edged book like The Brimstone Journals, the poems just assaulted me. All I did was take notes while they beat me up. The Shakespeare books (mine, not Will’s) took some planning. I wanted to use most or all of the forms of poetry—odd, weird things like sestinas and ghazals. But I was also telling Kevin’s story, so I had to figure out ways to get the forms in smoothly. Mostly, though, I just show up seven days a week.

Do you have a favorite among all the poems/poetry books you have written?
Ron: My book Fever from Red Hen Press is for adults, but I’ve had a lot of kids write me about it. I’ve never written a poem that a twelve year old or an eighty year old couldn’t read and, probably, like. Sometimes the subjects or themes are serious, but I’m not a serious person.

Would you like to share the details of any new poetry project(s) that you’re working on?
Ron: I hope this works out, but I’m already having trouble with just the concept: I’d like to write a new Canterbury Tales set in the study hall of a high school. “Breakfast Club” meets On the Road. I must be nuts to even think about this.

Your favorite place to write?
Ron: I can write anywhere. The muse is well-traveled.

Favorite quote on writing/poetry?
Ron: “Shut up and put your butt in the chair.”

Your nominee for the next Children’s Poet Laureate?
Ron: Helen Frost, who is a genius.

***************
Since Ron mentioned his book Fever, and since I'm on a bit of a fairy tale kick, here's another poem from his adult collection that young adults will enjoy.

I miss my stepmother. What a thing to say
but it's true. The prince is so boring: four
hours to dress and then the cheering throngs.
Again. The page who holds the door is cute
enough to eat. Where is he once Mr. Charming
kisses my forehead goodnight?

Every morning I gaze out a casement window
at the hunters, dark men with blood on their
boots who joke and mount, their black trousers
straining, rough beards, callused hands, selfish,
abrupt ...

Oh, dear diary—I am lost in ever after:
Those insufferable birds, someone in every
room with a lute, the queen calling me to look
at another painting of her son, this time
holding the transparent slipper I wish
I'd never seen.

Ron's book Geography of the Forehead (also written for adults) is a compelling collection of insightful, startling, and often ironic poems about a wide range of topics. Here's one that will appeal to all the vampire-crazy teens (and adults!) out there.

This diet of yours is so cool. Just a few pints a day
and I'm like really thin. My old boyfriends are totally
after me now, but no way! All they ever wanted was
you-know-what and make it quick. God, the way you
licked my wrist! You took hours.

I told my mom those holes in my neck were a fad,
like nose rings. She bought it! And don't worry
about Dad. He's so checked out, the walking
dead if you know what I mean.

I can't wait for tonight, Count d. I love it
when you do that thing with your cape!
And then we have to chat. My folks are after
me to go to city college. But now I couldn't
stay awake in class, anyway, and if I'm going
to live forever, what's the hurry, right?

I've been thinking, though. I want to be special,
not just another long, white neck. Let's face it. You're
like 9000 years older than me. You've really been
around. So maybe when we fly back to your castle
in Pennsylvania, I should at least go to night school.

We'll talk, okay? Right now I have to put the crucifix
away, throw a towel over the mirror, then get into
my jammies. Oh, and brush my teeth which, I have
to tell you, seems to take a little longer all the time.

Ron has also written a number of poems about Superman. "Dear Superman" appears in Geography of the Forehead, while the poem "Kryptonite" appears in Fever. You can read both of these poems in their entirety at The Writer's Almanac: Ron Koertge.

I've written about Ron's adult poetry here, but his verse novels are stunning works that deftly capture adolescent voices and experiences, AND they are written for young adults. For more information about the Shakespeare books, check out my blog tour post entitled On Love, Loss, Poetry, and Growing Up - Meet Kevin Boland.

To sample even more of Ron's poetry, visit the Poetry 180 List of all poems (3 poems), Jacket Magazine's October 97 issue (5 poems), and the Barcelona Review issue 10 (3 poems).

Let's sing a rousing chorus of happy birthday and offer our thanks to Ron for participating in the Poetry Makers series.
All poems © Ron Koertge. All rights reserved.
Posted by Tricia at 12:01 AM