#MTBoSBLaugust - The Hundred Board vs. The 0-99 Chart

In my work with preservice teachers I find myself thinking a lot about the language of math and the models we use. I spent even more time thinking about these issues as I watched them play out in second grade last year. Today I want to discuss the differences between the 100 board and 0-99 chart. 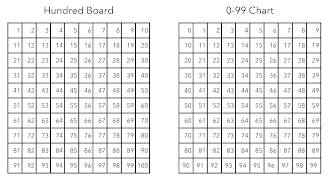 In some circles, the 0-99 chart is also called a 100 board. In old-school language it is called a counting chart. I don't particularly like either of these names. Here's why.
I know these are really minor points, but they speak to the issue of precision and the language we use to describe mathematical tools.

Beyond the semantic issues of what we call these charts, I have greater concerns about the use of 100 board (and the 120 board we now see to support Common Core standards).

Our system of numeration is a base-10 system. This means we have 10-digits (0-9) and that every number can be made using one or more of these digits in combination. Ten and powers of ten are used to construct the system.  Larger numbers are built by repeatedly bundling ten: 10 ones make one ten, 10 tens make one hundred, 10 hundreds make one thousand, and so on. In simpler language, every time we reach ten of a particular unit, it is regrouped and renamed. Here's what the tens column looks like on these charts. Note the placement of each. 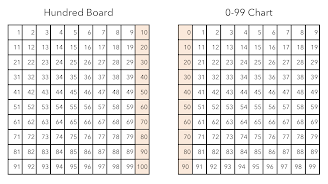 This is where my problem with the 100 board comes in. When we reach 10 ones on a hundred board, they still remain in the ones row (or column, depending on how the chart is arranged), but they belong at the beginning of the next decade. On a 0-99 chart all the numbers in a decade appear in the same row. For example, on a 100 board, the decade row for thirty begins with 31 and ends with 40. On a 0-99 chart, the decade for the thirty row begins with 30 and ends with 39. 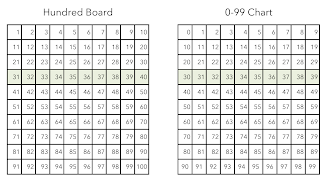 This representation on the 0-99 chart is much clearer and more accurately represents the way our number system operates.

The other idea the 0-99 chart makes explicit is that zero is an even number. Even though we don't begin counting with 0, placing it on the board shows students that one less than 1 is 0 and that zero IS a number! On a 100 board we recognize numbers ending in 0 as even, but because zero does not appear, students don't view it as a number (just a placeholder) and often question its classification, wondering if it is even, odd, or neither. The 0-99 chart can help students overcome these misconceptions.

In the final analysis, both charts can be used for developing skills in counting up and counting back, skip counting, finding one more/one less and ten more/ten less than a number, recognizing patterns, place value, addition, subtraction, finding multiples, prime numbers, and more. However, the 0-99 chart does this while helping students work within the structure of our base-10 system.

Now that I've articulated the reasons that I feel the 0-99 chart is a better tool than the 100 board, here's a set of charts for you to use. One is a traditional 0-99 chart (oriented horizontally), while the other displays the numbers vertically. 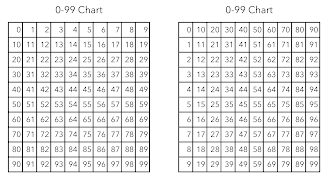 What are your thoughts about the difference between the 100 board and the 0-99 chart? Which do you prefer and why?
That's it for day 10 of #MTBoSBlaugust. I hope you'll come back tomorrow to see what else I have to share.
Posted by Tricia at 7:30 AM