I love to teach kids to play strategy games. They're great for indoor recess and for encouraging mathematical thinking. They require kids to predict, plan ahead, analyze moves and mistakes, and reflect on their strategies. I generally print and laminate copies of game boards and directions and provide simple markers for kids to play. In this time of COVID-19, I've been working on digital editions of games.

Alquerque is a strategy game that is thought to have originated in the Middle East. It is considered to be the parent of draughts (checkers). In Alquerque, two sides of twelve pieces face each other on a board of 25 points. These are joined by horizontal, vertical and diagonal lines, though not every point has diagonal connections. The goal of the game is to capture all of the opponent's pieces.

The game begins with 24 pieces, divided between the two players, 12 black for one player and 12 white for the other.

The player who begins is decided at random, or at the agreement of the players. (Note that the first player is at a slight disadvantage.)

A piece can be moved from its starting point, along any marked line, to an adjacent empty point.

A piece can capture an adjacent enemy piece, if a marked line joins their respective points, by leaping over the enemy onto the empty point beyond. The enemy is then removed from the board.

If such a capture can be made, then it is REQUIRED. If there is a choice of such captures, then the player may choose which capture to make.

When a piece has captured an enemy and is in a position to capture another in the same manner, then the further capture MUST be made. In other words, the capturing piece must perform all possible captures in its turn.

The game ends when one player has lost all his pieces. The opponent is the winner.

The game is considered a draw if both players are equal, and neither can safely engage their opponent without losing the game. This most often happens when both players are reduced to one or two pieces each. 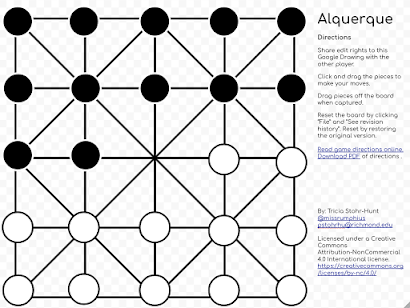 You can make a copy of the digital version to try with your students.

You can also download a PDF version for playing face-to-face.

That's it for day 14 of #MTBoSBlaugust. I hope you'll come back tomorrow to see what else I have to share.