Fabulous Fables - A Trio of Aesop

My son and I have been reading Aesop's fables for a few weeks now. Part of the fun in sharing these has come from reading the same stories in different books. These are the three volumes we have been enjoying.

The Rabbit and the Turtle by Eric Carle - There are 11 fables retold and illustrated by Eric Carle in this book. Each double-page spread contains the fable on the left and a full page illustration of a scene or characters from the fable on the right. The moral of each story is highlighted at the bottom of the text in the same color as the title. We particularly enjoyed The Frog and the Ox, a fable accompanied by an illustration of two animal families dressed up and out for a stroll. We see Mr. Frog all puffed up, trying to be as big as Mr. Ox. He looks as though he's about to float away, but upon reading the tale we learn he puffs himself up so much that he explodes! 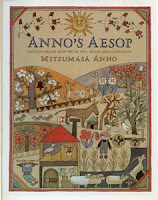 Anno's Aesop: A Book of Fables by Aesop and Mr. Fox by Mitsumasa Anno - In this volume, Anno gives readers two stories based on the same illustrations. Readers learn that a book of Aesop's fables has been found by Freddy Fox, who begs his father to read him the tales. However, doesn't know how to read. What we get then is a "book within a book" which is presented with the top portion (2/3) of the pages retelling selected fables from Aesop, while the bottom portion provides Mr. Fox's interpretation of the pictures. This device makes for an interesting read, as Fox's "reading" of the handsome woodcut illustrations doesn't always match the fable.

Aesop's Fables by Jerry Pinkney - This volume illustrated by Pinkney is by far the most comprehensive of the three, containing 61 fables. It also begins with an introduction in which Pinkney writes, "From my earliest years my parents used the powerful themes from the tales to teach my siblings and me about human folly and virtue. At the time, though, I was only interested in the stories' compelling characters and their fast-paced, colorful narratives; I never really wondered about their purpose or origins." What follows are well-known and lesser-known fables, some accompanied by full page illustrations, others by small glimpses of characters in the tales.
If you are looking for other tales, Books for Keeps has an article entitled The History of Aesop's Fables that provides short annotations of many different versions available. Lit2Go has a variety of Aesop's Fables available for download in MP3 and PDF format so that you can listen as you read along. Aesop's Fables Online Collection contains translations of more than 650 fables. Finally, as part of the course Introduction to Computing in the Fine Arts at UMass Amherst, students are given the task of illustrating the traditional Aesop's fables along side their own retelling of the fables in a modern setting. You can view their traditional and modern interpretations of the tales. (Warning: Some of the modern versions are not appropriate for children. Read them first before sharing!)
Posted by Tricia at 8:24 PM