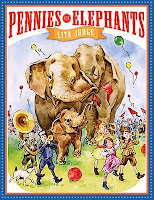 Would you contribute money to buy an elephant for your local zoo? How about three of them? In 1914, the children of Boston raised $6000 (using the Consumer Price Index for comparison, that's relatively equivalent to $128,385 today) to buy elephants for the Franklin Park Zoo. Lita Judge's new book, Pennies for Elephants, is a fictional account of that event.

The book opens with a newsboy hawking a paper and shouting the words "Pennies for elephants! Pennies for elephants! Send in your pennies, your nickels, and dimes!" Walking past the newsboy is a snooty couple, walking an equally snooty dog, obviously paying no attention to the enterprising young man. But when a boy and a girl (siblings) stop to look at the headline, they learn that three elephants will be given to the city zoo if the children of Boston can collect $6000 in two months. As soon as they read that headline, Dorothy and Henry are off to do their part, though emptying their piggy banks is only the beginning of their efforts to give the elephants a home. Along with other children in the city they shovel snow, host tea parties and magic shows, wash windows and neighborhood pets--ANYTHING to raise money for the elephants.

While the illustrations depict the goings-on, the pages are also sprinkled with newspaper clippings containing updates on the money raising efforts. It is clear that these are inspired by actual accounts. As stated in the author's note (cleverly disguised as a newspaper article on end pages of the book):

The Post's newly appointed "elephant editor" ran stories every day from March to June. Every donation, from one cent up, was acknowledged in a daily list of contributors.

Fenway park makes an appearance in this book, as do a children's marching band, three performing elephants, a Studebaker, a child on stilts, a Boston Post newsie, and much more. The illustrations place the reader squarely in the midst of the time period and add a great deal of depth to the story. My son and I have been reading this nearly every night since we received it, and he's still finding new things in the illustrations and asking lots of questions. (For example, "Why are there cars AND horse drawn carriages? What is that furry thing on that ladies' arm? (A muffler.) Did the tooth fairy really only leave a nickel back then? (Inflation.) What's stuck in that man's eye? (A monocle.) Could you really buy a dress for $1.59? What kind of a camera was that?" and so on.) We, in turn, have been doing research (together) to answer these questions.

To learn more about the book, take a look at this trailer. It includes original newspaper pictures so you can see that the characters in the book were inspired by real people.
At the Pennies for Elephants web site you will find downloadable activities, a timeline describing world events, newspaper clippings from the time, and much more.

Both the text and illustrations have much to recommend it, but in the end, this is ultimately a heartwarming book that will make you pull for the kids right up to the cheer-inducing end. Recommended with enthusiasm.
Book: Pennies for Elephants
Author/Illustrator: Lita Judge
Publisher: Hyperion Books
Publication Date: June, 2009
Pages: 40 pages
Grades: preK-4
ISBN: 978-1423113904
Source of Book: Copy received from author.
Posted by Tricia at 10:42 AM