January is National Puzzle Month. In our house we do a lot of jigsaw puzzles (usually one a week), but we also like logic puzzles and "thinking" games (sudoku, Mastermind, chess, etc.). As big readers we're quite fond of fiction with challenging puzzles to solve. Here are some books and/or series that will encourage readers put on their thinking caps. Also included are links to related puzzling resources. 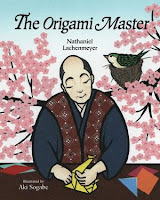 The Origami Master by Nathaniel Lachenmeyer, Lissy's Friends by Grace Lin (picture books), and Fold Me a Poem by Kristine O'Connell George (poetry) are all books about origami. Paper folding is a great visual and spatial puzzler for kids and adults. It's also fun!
Do you have a favorite book that offers something to puzzle over? If so, please share. I would love to add your ideas to this list.
Posted by Tricia at 8:34 PM