While the world watches events unfold in Haiti, many children will have questions about earthquakes and the damage they do, as well as this place called Haiti. Mitali Perkins has Haiti covered with a terrific short list of children's and YA books set in Haiti. For my part I've put together a short list of books about earthquakes.

The list that follows explains the science behind earthquakes. You'll find some nonfiction titles, some poetry, and a bit of history, both true and imagined.

Earthshake: Poems From the Ground Up, written by Lisa Westberg Peters and illustrated by Cathie Felstead - This collection of twenty-two poems introduces geologic concepts through metaphor and word play in a variety of poetic forms.

Earthquakes, written by Michael Woods and Mary Woods - Did you know that there is an earthquake somewhere on earth every day? This book in the Disasters Up Close series includes dramatic images and stories of survivors while examining the facts and figures related to some of the world’s biggest earthquake disasters. 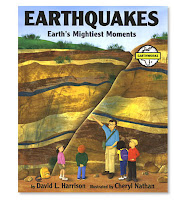 Earthquakes: Earth's Mightiest Moments, written by David Harrison and illustrated by Cheryl Nathan - A good choice for younger readers, this book provides a nice introduction to earthquakes. Readers will learn about the layers of the earth, plate tectonics, the scientists that study earthquakes, and more.

Earthquakes, written by Franklyn Branley and illustrated by Megan Lloyd - This book in the Let's-Read-and-Find-Out Science series explains why earthquakes happen, where they occur most often, and what to do if one happens near you.

How Mountains Are Made, written by Kathleen Weidner Zoehfeld and illustrated by James Graham Hale - This book in the Let's-Read-and-Find-Out Science series explains the constructive forces behind mountain building.

Jump Into Science: Earthquakes, written by Ellen Prager and illustrated by Susan Greenstein - This series from the National Geographic Society explains the causes and effects of earthquakes.

Time for Kids: Earthquakes!, written by the Editors of Time for Kids - Using simple language, this book is divided into short chapters and includes the topics of The Earth Rocks, Measuring Movement, Monster Quakes, and Stay Safe. A glossary is included. 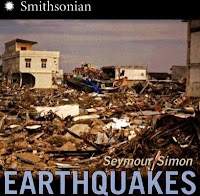 Earthquakes by Seymour Simon - Full color photographs on every page enhance this clear and concise text that introduces the cause of earthquakes and their effects. Historic information on earthquake events is also included.

Witness to Disaster: Earthquakes, written by Judy Fradin - This book delves into the science of earthquakes and focuses on the more deadly aspects of earthquake disasters, including building collapse, fire, landslides, avalanches, and tsunamis. Also included is a good deal of information on notable earthquakes in history.

The Earth-Shaking Facts About Earthquakes with Max Axiom, written by Katherine Krohn and illustrated by Tod Smith and Al Milgrom - Max Axiom, super-cool scientist and teacher, explains the science behind earthquakes in graphic novel format.

Janice VanCleave's Earthquakes: Mind-boggling Experiments You Can Turn Into Science Fair Projects, written by Janice VanCleave and illustrated by Ray Burns - This book contains numerous hands-on activities that will help students better understand earthquakes. The science is good and the explanations are particularly clear and accessible to readers.

If You Lived at the Time of the Great San Francisco Earthquake, written by Ellen Devine and illustrated by Pat Grant Porter - This book takes readers to San Francisco before, during and after the 1906 earthquake.

The San Francisco Earthquake of 1906, written by Marc Tyler Nobleman - This title in the We The People series uses photographs and illustrations to describe the events of the San Francisco earthquake. (See a sample at Google Books.)

The Earth Dragon Awakes: The San Francisco Earthquake of 1906, written by Laurence Yep - Told in the alternating voices of two young boys, Yep tells a gripping story about the events surrounding the San Francisco earthquake. Also included are real-life anecdotes and information about earthquakes.

Earthquake in the Early Morning (Magic Tree House #24), written by Mary Pope Osbourne and illustrated by Sal Murdocca - Annie and Jack find themselves in San Francisco shortly before the 1906 earthquake strikes.

Earthquake, written by Milly Lee and illustrated by Yangsook Choi - Milly Lee based this story of a child and her family on the memories of her mother, who was eight years old when the 1906 earthquake devastated San Francisco. When the earthquake hits the family must leave their home in Chinatown and make their way to the safety of Golden Gate Park. Includes an author's note that provides more details about the earthquake and describes what happened to Lee's family.

If you are interested in additional titles about the San Francisco earthquake of 1906, see the annotated list put together at Through The Looking Glass.

In addition to the titles listed above, here are a number of useful sites for teachers and kids.
If I've missed a useful title, please let me know and I will add it to the list.
Posted by Tricia at 8:18 AM