We finally arrived at our hotel in Beijing just before 11 pm. I want to finish telling you about our day yesterday and this morning's final meeting before turning in for the night.

After leaving Long Shan Temple we headed for the night markets of Taipei. There are many all over the city, but there was one in particular that we were looking for--Snake Alley. This alley was made famous for its snake shops, places where visitors can eat snake soup and sip snake venom. There were many food vendors along this stretch of market, many with exotic looking fruits, vegetables and seafood. Everything was fresh and very much alive, that is, until it was eaten. I would have taken a picture, but everywhere you looked there were signs stating no picture taking. Perhaps this custom is just too barbaric for pictures. Since snakes have long since disappeared from the island of Taiwan, all the snakes in the market are imported from Guam. While my group was not brave enough to try snake, one of our colleagues did try a bowl of snake soup. Yes, he said it tasted like chicken. He did, however, find the skin not at all what he had imagined it would be. My group pressed on, looking in on a few of the vendors and finally deciding on a street vendor for food. 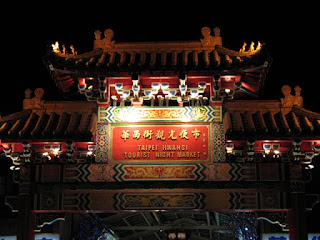 Even though these markets are known as "tourist" markets, they are frequented largely by locals. In fact, our table of Americans seemed to provide a great deal of comic relief and surprise to the people who walked by and stared. The children waved and smiled, while many of the adults giggled upon seeing us. We sat on stools around two rickety tables we had pushed together and ate a hearty dinner of noodles, greens, and spring rolls. We drank beer that we bought at a local 7-11 (these are EVERYWHERE in Taipei) and brought with us. We had a great meal and enjoyed watching people watching us.

Some of us ended the evening early (like me, as I had a blog to update!), while others stayed to walk the market and shop. When we arrived back at the hotel we learned that our plans for the morning had changed and that we would be getting picked up at 6:15 am for our final meeting. So, early this morning we made a very long trip by cab out to the northern part of the city. We finally made it to a hotel that shared the street with these stores and shops. 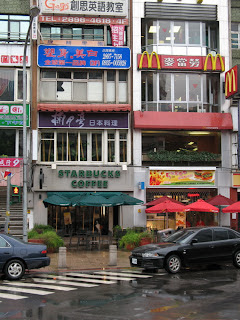 Our breakfast meeting at the hotel was with Ma Ying-jeou, KMT candidate for the 2008 Presidential election. This meeting would have been similar to breakfasting with John Kerry a few months prior to the 2004 election. Mr. Ma was twice elected mayor of Taipei and was the KMT party leader. He was charming and open to answering our questions about Taiwan's political situation. He offered thoughtful answers and seemed pleased to have the opportunity to meet with us. He left us to finish riding the last 28 km of 6000 km bicycle trek across Taiwan to meet the voters. Upon finishing this meeting we took the MRT back to the hotel to prepare for our departure and the trip to Beijing via Hong Kong.

Overall, Taipei was an amazing start to this trip. I am looking forward to further adventures in Beijing. We'll be here for four full days and have lots to see. Stay with me, won't you?
Posted by Tricia at 11:24 AM