Our day today began at Beijing University, the top University in China. We had a brief lecture and discussion with Professor Chu, an expert in China security issues. The conversation was wide ranging, covering the need for China’s military expansion, aspects of China’s foreign policy approach, the Taiwan issue, and more. Here is a picture of the building we met in. 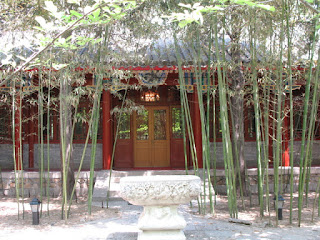 After our meeting we took a tour of the campus with several students and then went to lunch. The bulk of the afternoon was spent touring the enduring icons of China and its capital city. We began in Tian'an Men Square. Here we saw the building that houses Mao's mausoleum, the Great Hall of the People, the monument to the People's Heroes and the Ming dynasty gate where Mao's picture hangs. Here are some pictures. 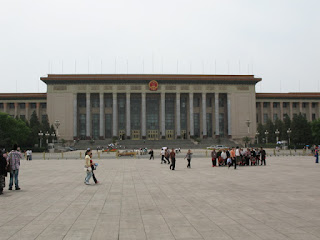 Great Hall of the People 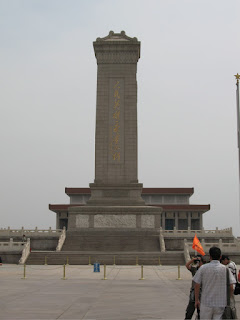 Monument of the People's Heroes 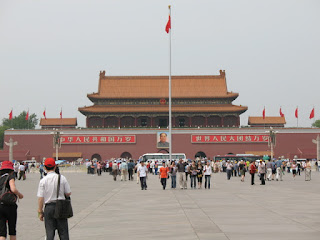 After walking across the Square and avoiding every manner of street sellers (they were very persistent), we walked underground and across the street to the main gate that would eventually lead us into the Forbidden City. While walking through the first Ming dynasty gate, you cannot miss the enormous picture of Mao that hangs above the entrance. 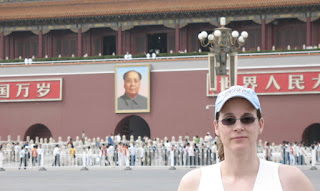 We only had a few hours to explore the Forbidden City, and I would guess that you could easily spend a week there and not see it all. The entire architectural complex was completed in 1420, and served as the home for 24 emperors for nearly 500 years. Each of the doors into the city have studs that run in rows. There are 9 rows of 9 studs. The 3rd row from the bottom is at hand height, and since it is good luck to touch them, most of the Chinese visitors were making sure to touch each one in this row as they passed through the doors. There are so many gates and levels inside the palace that it is dizzying. It is said that there are 9,999 rooms in the city. After seeing the sheer number of buildings, this isn't hard to imagine. North of the inner palaces are a series of gardens laid out symmetrically. These are beautifully constructed with pavilions, rock gardens, trees and water. This space is especially important because the remainder of the city is all stone. Here are some pictures. 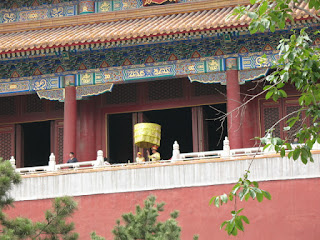 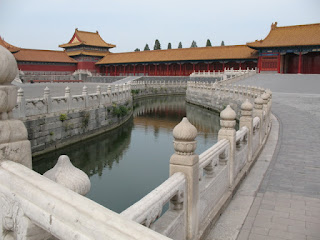 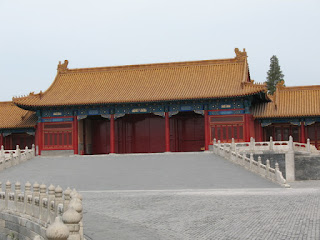 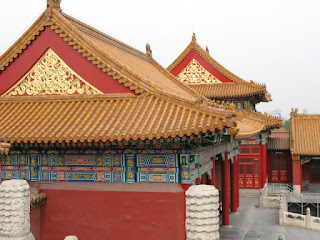 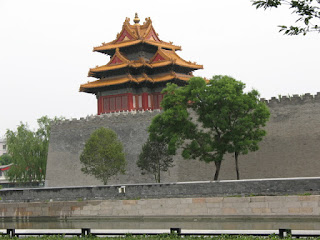 After leaving the Forbidden City we went to a tea ceremony at a government sponsored tea house. We were introduced to proper procedures for making and tasting tea and were able to try four different varieties. I did buy a teapot for myself (this will come as no surprise to those who know me!) and some oolong tea.

From here we went to the Red Theatre to see Chan Yi: The Legend of Kungfu. This was a performance that combined dance, kungfu, acrobatics, and some high flying aerial stunts. The most surprising thing about this event was that the entire show was prerecorded in English! Above the stage hung a screen that translated the words into Chinese characters. We were in the third row and had an amazing view, though during one scene we were completely enveloped in fog.

This was a fantastic first day in Beijing. I only wish we had more time to explore the Forbidden City. Tomorrow I'll be writing after a visit to Badalang. Good night all!
Posted by Tricia at 10:12 AM