We spent our morning today touring the Jokhang Temple. This is the holiest temple in Tibet, and we were fortunate enough to be in Lhasa during the holiest month of the year, so we saw many pilgrims to this holy place. The Jokhang Temple sits in the heart of the Barkhor, the bustling marketplace in Lhasa. The square outside of the Jokhang is marked by two large poles laden with prayer flags, and a large incense burner that constantly spews the scent of juniper bushes.

Pilgrims to the Jokhang make their way in a clockwise pattern around it, with many fully prostrating themselves along the way. The temple itself was magnificent, but so crowded with tourists and pilgrims that it was a bit uncomfortable. The view from the roof was absolutely stunning. Here are some pictures. 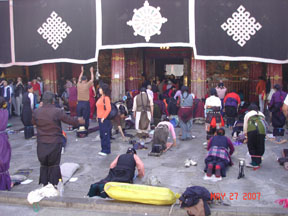 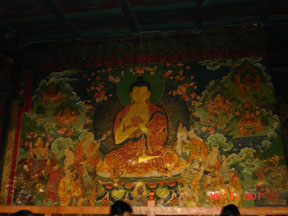 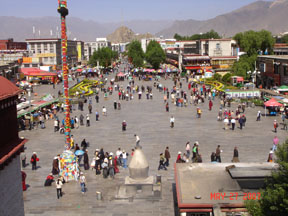 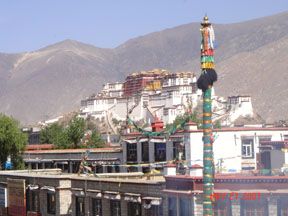 After our tour of the Jokhang we spent the remainder of the morning shopping. Here are a few images of the Barkhor. 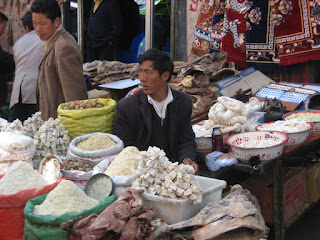 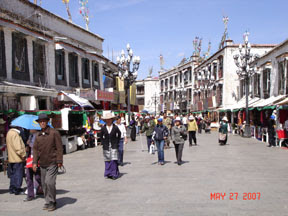 After lunch we headed to Tibet University for a lecture on Tibetan culture. We learned about the rituals related to birth and funerals, as well as Tibetan Buddhism. When we had time for a question and answer period, we asked a bit about how deep the understanding of Buddhism was by the pilgrims who visit. We learned that while most practice the rituals associated with religion, since approximately 60-70% of Tibetans are illiterate, their understanding of the philosophy of their religion does not compare to the monks, since they do not read the texts.

The evening was ours, so after a group dinner we wandered around the market before heading back to the hotel in a pedicab. Our last day in Lhasa was a memorable one, and one in which we all left with bags heavier than when we came, due to our successful outing in the Barkhor. We are all becoming pretty good at bargaining, and can't wait to try our skills in the next cities. I think we'll all be a bit sad to leave Lhasa behind, but we're ready for the next stop on our trip.
Posted by Tricia at 8:06 AM