We said our goodbyes to Lhasa this morning and left for Kunming. The most exciting part of the morning was the bus ride from Lhasa to the airport. Normally a one-hour drive, we left at around 9 am for an 11:25 flight. However, a simple one-hour drive was not in the cards for us.

First, I should tell you that the road to the airport is a two-lane road. As in most of Lhasa, the rule of size applies to all traffic situations. There were very few lights in Lhasa, so at crowded intersections, the biggest vehicles, like trucks and buses bus, simply barreled through while drivers incessantly honked their horns. We never saw any accidents, but many close calls. So, these were the conditions our driver was operating under when he turned onto the road for the airport and found he was behind an enormous convoy of slow moving army vehicles. Being the brave soul that he was, he spent the next 45 minutes passing trucks in the convoy while vehicles came speeding at us in the approaching lane. Tractors, motorcycles and small cars were all warned and slowed by the horn. Large approaching vehicles, however, meant that the bus needed to not only pass trucks in the convoy, but frequently slid between them at inopportune moments. When we finally passed the lead truck in the convoy, the entire bus broke out clapping and cheering for the driver.

We finally arrived at the airport around 10:30 and were checked in as a group. We quickly made it through security and tried mightily to find our gate (there were only 4 and one wasn’t in use), but at this late time it was still unassigned. Around 11 am we learned the flight would be briefly delayed, but we did finally take off before noon. One thing I have noticed on these group bookings is that all the men get aisle or window seats, while all the women get stuck in middle seats. It’s been really uncomfortable, and today was no exception. I was stuck between a man who had not showered in a very long time, and another who kept spitting into tissues and then stuffing them into the seat pocket in front of him. I know, I should look on the bright side. This is China and spitting is something that people do everywhere, so he could have just as easily spit on the floor. In any case, the view leaving Lhasa was spectacular. 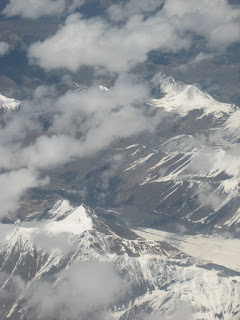 We briefly touched down in Shangri La to let some passengers disembark and to take on new ones. The stop was quick and we were soon in the air again. Here are a few pictures of Shangri La from the air. 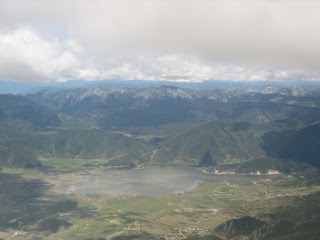 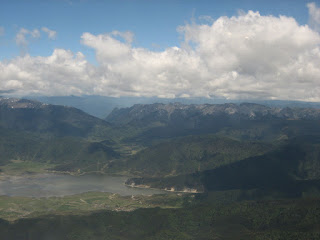 We finally landed in Kunming around 3pm. After a bus ride to the hotel, we dumped our bags in our rooms and headed out for a meeting at Kunming Normal University, where we sat in on student presentations. After this we ate another terrific meal with a few students and the Director of the SIT program. We finally arriveed at our hotel a bit road weary. Tomorrow is a tourist day, so we're all looking forward to some new sights.
Posted by Tricia at 8:39 AM