Our time in Kunming has been very short compared with other cities. The last part of our stay consisted of a morning at Kunming University where we had a brief presentation from Dr. Xiao Xian, a political scientist and the Vice President for International Exchange, followed by a lecture on ethnic minorities in China and Yunnan province by Dr. Shen Hai mei. The PRC officially recognizes 56 distinct ethnic groups, with Han Chinese making up nearly 92% of China’s total population. Yunnan province is a very diverse province in China, as it is about 70% Han Chinese and 30% ethnic minorities. The last of the 56 officially recognized groups was recognized in 1980. Even though there are still groups not recognized by the government (about 730,000 people), and others that are controversially classified, there has been no movement to increase this magic number of 56 ethnic groups.

After our lecture we took a quick tour of campus with a stop off at their Museum of Anthropology and Ethnology to examine more closely some of the ethnic minorities that populate the Yunnan province. The walk through campus was lovely. We happened to be at the “old” campus, which was established in 1923. The buildings were spectacular. The campus itself was quite and very peaceful, with lots of green space and areas for students to congregate and study.

Once we finished at Yunnan we headed to lunch then made our way to the airport for the flight to Shanghai. I can honestly say that I am really tired of flying at this point. To date I have taken 9 flights. I can look forward to one really L-O-N-G flight from Shanghai to Chicago, and then a short hop to Richmond. I am having a wonderful time, but I am now more than ready to get home.

We arrived in Shanghai around 7:30 pm. We were met at the airport by our guide, Lucy. She took us our for a fantastic dinner and then for a ride on the Huangpu River to see the city at night. Here are some of the sights from that quick cruise. 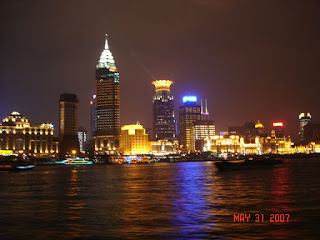 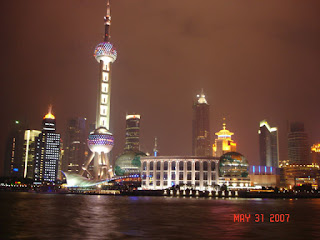 We've been spending a lot of time as tourists lately, so we need to put our thinking caps on for tomorrow, as we plan to spend our entire day visiting Universities and with academics. We still have lots to learn, so it should be a good day.
Posted by Tricia at 9:08 AM