I believe I have more books on animals and nature than any other topic in my teaching library. As a science teacher, that probably doesn't surprise you. However, my love for animals started long before I began teaching. When I was young I tried to ensure I never missed an episode of Mutual of Omaha's Wild Kingdom. That show started a life-long fascination for animals of all types. However, it was a drive through Lion Country Safari in Loxahatchee, Florida in 1970 (I was nearly 5) that cemented a life-long fascination for African animals. 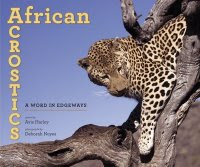 The poems in this book are deftly created, with words spelled out vertically range from single words (herald, lying, poppet, outstanding) to phrases (wild stripes, cloud friends, fatherly advice, beauty in the beast). You'll find much more than simple acrostics here, with Harley including double acrostics, a quintuple acrostic (yes, that's FIVE words), and concrete acrostic. The patterns that exist within them never get in the way of the poem itself, and finding them is a bit of a surprise.

Back matter includes More About Acrostics where Harley describes and provides examples of the types found in the book, Nature Notes on each animal, and A Note From the Photographer describing her experiences capturing photos of the scenes and animals in the book. 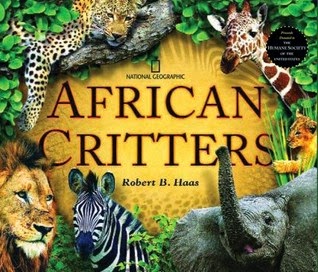 African Critters, written by Robert Haas, is a first person account of his experiences photographing animals while on safari in different parts of Africa. After an introduction entitled Welcome to Africa, Haas writes about observing leopards, elephants, wild dogs, lions, scavengers (hyenas), the big grays (hippos and rhinos), itty bitty critters (Oxpecker bird, purple dragonfly, dung beetles), and cheetahs. Each chapter tells a true story about the location (Mala Mala, Okavango, Sabi Sand, and other places) and the animals observed there. The first person observation of the habitats and behavior of the animals is extraordinary. Also included are several small informational boxes in each chapter that provide additional information about the animals.

Here's an excerpt from the chapter The Scavengers of the Savanna (pp. 53-61).

In the animal world, it is wrong to pin the label of "good guys" on certain critters and "bad guys" on other critters. Each type of animal must survive in its own way.
For most meat-eaters, or carnivores, finding food is difficult and dangerous. It means capturing other critters who are usually able to escape and often willing to fight for their lives.
Certain critters, known as "scavengers," will feed on the meat and bones left behind by other hunters. The best-known scavenger in all of Africa is the hyena.

After many safaris I had learned to respect the hyena as an animal with unique skills and a special role in the African wilderness. At first, I thought the hyena was simply a scavenger who would eat scraps from a fresh lion kill. But the hyena is also a fierce hunter who brings down prey after a chase that lasts for miles. And hyenas play an important role in their ecosystem. With a huge set of powerful jaws, they crush and eat even the largest bones left behind by lions and leopards. That way, they recycle food that others can't digest.

And here's an example of one of the informational boxes from this chapter.

The largest type of hyena in Africa is known as the spotted hyena. Spotted hyena cubs are all black. The coat of an adult is thick and coarse with dark spots, and its muzzle is black. Female spotted hyena are larger than males, and the clan is usually led by a female. Even though clan members often hunt as a team, once their prey is brought down, each hyena fights for its share of the carcass.

Every chapter is packed with information about the animals and how they survive in the often harsh African wilderness. Back matter includes additional information on animals highlighted or mentioned in the chapters, an author's note on the photography and creation of altered and combined photos in the book, a glossary, extensive index, short list of references, and a nice list of books on animals by other National Geographic photographers.

Perfect Together
Harley's poems and Haas' observational stories offer an incredible introduction to the world of African animals. Begin with Harley's poems Moody Guy (rhino) and Sipping the Sunset (hippo). What kind of clues about them can you find in the acrostic words? Then read Haas' chapter on The Big Grays. Ask students what similarities and differences they found between the two descriptions of the animals, what surprised them, and the most interesting thing they learned. Continue on in this fashion, matching poems to the chapters in AFRICAN CRITTERS. When you're finished, consider making a class book on African animals.

And just in case you're interested, here's a photo from our 1970 visit to Lion Country Safari. 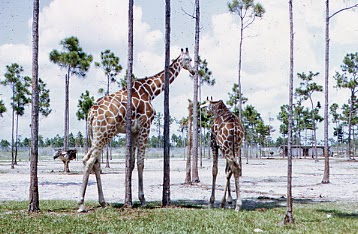