I'm always a bit amazed and saddened when I visit a museum and see a stuffed dodo bird. I imagine that some day in the distant future, young and old alike may only be able to see the rhino, elephant, panda, and other such animals in zoos or museums, their species having long since died out in the wild.

Saving our planet means keeping the air, water, and land habitable for both humans and animals alike. As the human population continues to grow, life becomes more difficult for many species of animals.


Today's book pairing looks both at animals that can no longer be found on Earth, and those that are in danger of disappearing.

Swan Song: Poems of Extinction, written by J. Patrick Lewis and illustrated by Christopher Wormell, is a collection of 20 poems that pay tribute to species that have disappeared since crossing paths with humankind. The book opens with these disturbing words.

More than ninety-nine percent of all species that have ever lived are now extinct.
. . .
On Earth, six animal species die every hour, many of the most recent due to climate change, habitat destruction, or human greed, carelessness or indifference.

A timeline runs across the bottom of the pages, with the poems ordered by when a species became extinct. You'll also find its scientific name and where it once lived. The first poem is to the aurochs, a species from which modern cattle descended that died out c. 1627. The last poem is to Miss Waldron's red Colobus monkey, a species that died out in 2000. In between you'll find familiar and unfamiliar animals, like the dodo and the blue buck.

Description: Loner; nightfall eyes;
Coat of spots on spots (disguise);
Once the New World's largest cat;
Mountain, grassland habitat;
Fed on any kind of meat;
Stumbled down a one-way street;
Color of a jealous sun.
Status: Nowhere. Future: None.

The book concludes with a series of endnotes describing each animal in further detail. 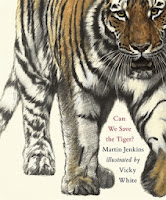 Can We Save the Tiger?, written by Martin Jenkins and illustrated by Vicky White, is an oversize volume with gorgeously detailed pencil sketches and a text that neither talks down to readers nor glosses over the difficult problems we humans have created. While Jenkins begins by discussing animals that are now extinct and why that is so, he goes on to discuss endangered species and once-threatened animals whose numbers are now on the rise.

The world's quite a big place,
you know. But it's not that big,
when you consider how much
there is to squeeze into it.

After all, it's home not just to billions of people, but
to the most amazing number of other kinds of living
things, too. And we're all jostling for space.

We humans have changed the world a lot over the
years, to make room for ourselves and to produce the
things we need.  We've turned forests into farmland,
dammed rivers, and built towns and cities to live in.
Some of the other animals and plants that we share
the Earth with have coped with the changes very
well.  But some haven't.

In fact, some have coped so badly that they're not here
anymore.

Discussing endangered species is a complex issue, impacting not only the animals themselves, but the humans that live in close proximity to them. Saving animals, while noble, is not always a black and white issue. Jenkins tackles this head on in a conversational and understandable way. Here's how he addresses the issues facing humans and tigers.


Tigers are big and they are beautiful and they're fierce. And all this makes life difficult for them these days.

Because they're big, they need a lot of space. But the countries where they live, like India and Indonesia, have huge numbers of people in them too, all trying to make a living and needing to be fed.

And because tigers are fierce, they don't mix very well with humans...

So if you were a poor farmer trying to make a living with a couple of cows and a few goats, you might not be too happy if you found there was a hungry tiger living nearby.  And if you knew that someone might pay you more for a tiger skin and some bones than you earn in three whole months working in the fields, then you might find it very tempting to set a trap or two, even if you knew it was against the law.

Perhaps it's not too surprising that there aren't that many tigers left.


Perfect Together
While Lewis' book focuses on extinct species, Jenkins' covers the range from extinct, to endangered, to making a comeback. Begin be reading some of the poems in SWAN SONG and discuss with students the reasons that these animals have become extinct. Follow this with Jenkins' book and see if some of these same reasons have contributed to the placement of animals on the endangered species list. These are difficult and sobering topics, so do ask students to think concretely about what they can do to help or make a difference.