As a child I was enamored of the oceans and sea creatures. I was particularly fascinated by seahorses and the role males played in carrying eggs and giving birth. This interest led me to research other animal species in which males played a more traditional role in rearing young. Unfortunately, the only real resource for information when I was growing up was the encyclopedia! Young readers today are much luckier than I was,  you can find books on a myriad of subjects today.

Today's book pairing focuses on the important role a number of dads play in the animal kingdom. 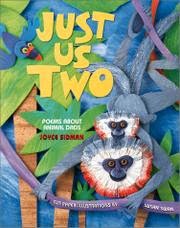 Just Us Two: Poems About Animal Dads, written by Joyce Sidman and illustrated by Susan Swan, is a collection of 11 poems on fathers in the animal world. In the About the Author section we learn a bit about the driving force behind these poems. It reads:


Joyce Sidman became interested in animal dads while reading to her children about the fascinating ways animals shelter, feed, and teach their young. As she watched her husband and sons at their home in Minnesota, she noticed many similarities between animal families and human ones! More study led her to the conclusion that many fathers in the wild are not the ferocious creatures we think they are. Like human fathers, they are protective, nurturing, and critical to the survival of their offspring.

Here's one of the poems from the collection.

Blind and tissue-skinned,
tiny mice enter the world
in a nest of grass.

Hide-and-seek masters,
they will soon whisk, surefooted,
through the chill spring night.

Until then, Father
warms this fragile thimbleful
of fluttering hearts.


The book concludes with back matter that provides additional information on each of the animals described in the poems. 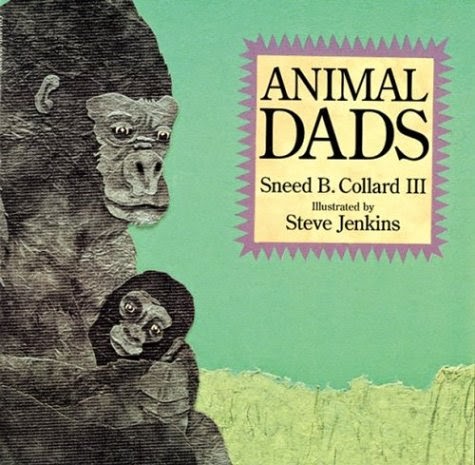 Animal Dads, written by Sneed B. Collard III and illustrated by Steve Jenkins, explores that roles that fathers play in the animal kingdom. The book opens with the sentence "Dads do many things." Yes, they do! They build homes, bathe young, give birth, carry eggs, hunt, babysit, and so so much more.

Written in two levels of text, readers will find short simple sentences narrated by the offspring on one level, and a paragraph of informational text on another level. Together these components provide readers with a wealth of information. Jenkins' cut-paper collage illustrations offer beautiful portraits of the animal described.


They build us homes to live in.

A stickleback dad builds a nest out of pieces of plants. The female stickleback lays her eggs in this nest. The male fertilizes them. Afterward, the male drives the female away—but his job isn't over yet. Dad continues to guard the nest from enemies, and he protects the babies after they hatch.

Perfect Together
The animals presented in both of these books are diverse and offer answers to the question "What do animal dads do?" After reading the Sidman's poems and the entries in Collard's book, readers can answer, "Many of the same things human dads do!" Some of the animal dads in Sidman's poems are also highlighted in ANIMAL DADS, so consider pairing individual poems with the related text by Collard.