I fell in love with words at a young age. Coupled with my love for science, I became enamored of the words to describe groups of animals and spent hours researching and memorizing the names.  When I turned turned twelve and my mother took me shopping for my birthday, I used money I'd saved to buy The Stranger by Billy Joel (vinyl!) and the book An Exaltation of Larks or The Venereal Game by James Lipton (yes, THAT James Lipton). I carried that book around for years, always entertained and intrigued by the contents.
While this topic may be more about etymology than science, young people are still interested in learning about the names given to animal groups. Today's book pairing can easily enhance and extend any study of the animal kingdom. 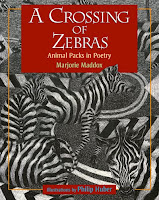 A Crossing of Zebras: Animal Packs in Poetry, written by Marjorie Maddox and illustrated by Philip Huber, is a collection of 14 poems that consider animal groups and how, perhaps, they came by those names. Why, for example, is a group of rattlesnakes called a rhumba? Here's Marjorie's poetic answer.

A Rhumba of Rattlesnakes

A rhumba of rattlesnakes knows how to shake
their long, slinky bodies and twist till daybreak.
They wobble their heads, give their hips a quick quake.
They jitterbug tails till their skeletons ache.

The rattle maracas and rat-tat on drums,
blow in tin trumpets, uncurl their tongues
to hiss a sweet song that invites you to come
a little bit closer. But you know to run

way over here and avoid the mistake
of dancing the rhumba with ten rattlesnakes.

While many of the poems in the collection rhyme, readers will also find free verse and poem for two voices. Here's my favorite of the lot. It is accompanied by an illustration of a rather alarmed scarecrow.


A Murder of Crows

Oh no, there they go, a murder of crows
throwing corncobs at the tattered scarecrow.
Though they never quite hit her, they flap to and fro,
cawing and jawing out names as they go.
They eat what's not theirs, then rush back for more,
ignoring her warnings, her pleas for reform.
No polite songsters here, well mannered with charm,
just fast flying hoodlums unfit for a farm. 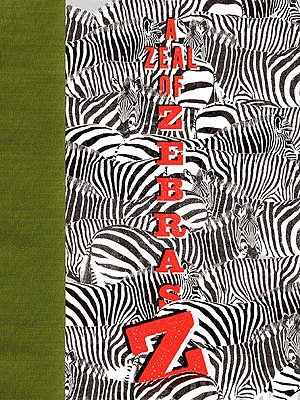 A Zeal of Zebras: An Alphabet of Collective Nouns, by Woop Studios, is a handsomely designed alphabet book that begins with "An Aurora of Polar Bears" and ends with the title collective, "A Zeal of Zebras." The folks at Woop Studios with responsibility for this project have impressive credentials. Two of the founders, Miraphora Mina and Eduardo Lima, spent a decade working as graphic designers on the Harry Potter franchise. In describing themselves they write, "United by a love of graphic design, words and images they founded Woop to bring a unique and exciting angle to the fascinating world of collective nouns." Unique, exciting, fascinating—their words pretty much sum up this book. The text is engaging and Woop's graphic designs are vibrant and fun, resembling in many ways vintage travel posters.

Each letter of the alphabet receives a double-page spread with a bit of informational text about the animal on the left side, with a gorgeous, full page graphically designed illustration on the right. Here's the text that accompanies one of my favorite entries.


A Galaxy of Starfish

Starfish, also known as sea
stars, are usually seen in
large numbers only when they
are washed up on beaches
after a storm.

However, some starfish may
gather together when they
are ready to reproduce, using
environmental or chemical
signals to coordinate with
one another.

On their web site you can find many examples of the artwork, including more pieces than occur in the book. Stunning illustrations paired with interesting tidbits of information make this an unusual and outstanding entry in the alphabet book genre.

Perfect Together
During your next unit on animal study, consider extending it to include animal groups. Using Maddox's poems and Woop Studios illustrations and snippets of information as models, encourage students to create their own books or a class book on animal collectives. For example, while studying reptiles they can design pages for collectives of snakes, turtles, lizards, crocodiles, and more. Students can then create their own illustrations and write about the characteristics that are common to reptiles and unique to each order.