In Appreciation - Books That Highlight Those Who Serve

Today is Veterans Day. First called Armistice Day, this holiday falls on the day when the Germans and Allies agreed to end the first world war on November 11, 1918. Though originally established in 1919 to honor Americans who served in World War I, the name was changed after World War II and the day expanded to honor veterans of all wars in which the United States has fought. On this day and every other day of the year I am extremely grateful for all those who have served and currently serve us and our nation today with courage, honor, and sacrifice.

Here are a few books I've read recently that highlight the lives of soldiers (no matter when, where or whom they serve) and their families. These titles can help us to see more clearly what their service truly means. 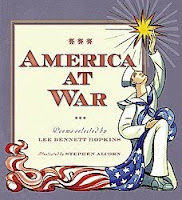 America at War, selected by Lee Bennett Hopkins and illustrated by Stephen Alcorn, is a collection of 54 poems by more than 40 poets. Divided into sections, each war is preceded by an introductory page that contains the name of the war and the dates it was fought, a quote about the war, and a brief summary of the conflict. (Read my review.)

Flygirl, written by Sherri Smith - Ida Mae is a young, light-skinned woman of color who wants desperately to fly. When she reads about the Women Airforce Service Pilots (WASP) program, she decides to keep her identity a secret and "pass" as white. The story of the choices Ida Mae makes to follow her dream provides an account of her training and describes the challenges and risks of being a WASP.

Mare's War, written by Tanita Davis - Alternating between present and past, the story of Marey Lee Boylen's service in the African American unit of the Women’s Army Corp (WAC) unfolds against the backdrop of a roadtrip with her bickering granddaughters. Mare's story is told as she experienced life in the 40's, and as such is filled details about day-to-day life during the war, the humiliations of segregation (even in the army), and the role of WACs in World War II.

Operation YES, written by Sara Lewis Holmes - While ostensibly about the kids taught by Miss Loupe in Room 208 of Young Oaks Elementary School, the story as a whole is set against the backdrop of life in the military during a time of war. When the entire class rallies around a project that unites activism, art, and the town around the base, readers learn what it means to be part of the military family.

Sunrise Over Fallujah, written by Walter Dean Myers - Eighteen year old Robin "Birdy" Perry, an African American born and raised in Harlem, is sent to Iraq at the beginning of Operation Iraqi Freedom in 2003. The emotional story of Birdy's service in a Civilian Affairs unit is an unflinching look at the life of a soldier deployed during a time of war.

Truce, written by Jim Murphy - This is the story of an event during World War I that I've been hearing about since childhood. Murphy deftly weaves a nonfiction narrative about the war in all its ugliness that still manages to find a bit of humanity in the chaos. (Check out the November 2009 Notes From The Horn Book for some insights from the author.)

What other recent titles highlight those who serve? Please share, as I'd love to know what you've been reading.
Posted by Tricia at 1:49 PM