Nonfiction Monday - How To Build Your Own Country 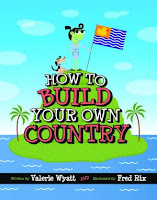 I've been holding on to this book for a while, but since I'm teaching a class tonight on how to teach civics in the elementary classroom, today is the perfect time to shine a spotlight on it.

As a child I had dreams about having my own room. I didn't have to wait long, because my sister went off to college when I was 9, but before that time there were many days when I longed to draw a chalk line down the center of the room to mark off my space, my territory. If you ever shared a room with a sibling, you know what I'm talking about. For any kid who wants to take the notion of having his/her own territory to the extreme, How To Build Your Own Country will show him/her just how to do it.

Written by Valerie Wyatt and illustrated by Fred Rix, How to Build Your Own Country is a step-by-step guide to building a country from scratch. Here's how it begins.

Suppose you stumble across a chunk of land that no one owns. You could take it over and declare it a brand new country. Your own personal country! The Kingdom of Jason! The Federal Republic of Katie! Even if it were only the size of a bathmat, it would be yours, all yours!

If you think that's highly unlikely, you're right. Unlikely, but not impossible.

What follows are three chapters that guide readers through the country building process. Wyatt uses the micronation of Bathmatia (a hypothetical country founded in a bathroom) to illustrate each point, as well as information about countries currently in existence. The book is chock-full of facts relating to topics in geography, economics, and history. However, they're so creatively woven into the text that kids won't feel like they've picked up a textbook when they crack this one open. You'll be more likely to hear kids sharing interesting tidbits with their friends. Here's an example from a sidebar entitled "One Dog, One Vote."

Duncan M. MacDonald cast his vote in a 2006 election in the United States. There was only one problem: Duncan is a dog. He was registered as a voter over the phone (his owner took the call) and received an absentee ballot in the mail. (Absentee ballots are used by voters who can't vote in person at election time.) Duncan marked his choice with a paw print, and then his owner, Jane Balogh, mailed in the ballot. Ms. Balogh was trying to make the point that it's too easy to get registered to vote because she was concerned about voter fraud. For doing so, she was convicted of making a false statement to a public official.

The first chapter, entitled "Stake Out Your Identity," details naming your country, finding a population, designing a flag and choosing a motto, and writing a national anthem. In addition to helpful hints for completing each task, readers will find some handy-dandy activities along the way, like the U-Name-It matching column for folks stumped for a name, or the Mad-Lib™ style fill-in-the-blanks for writing a national anthem.

Chapter two, entitled "Run the Country," explains setting up a government (autocracy, oligarchy, theocracy, single-party government, and democracy are all described), holding elections, writing a constitution, making the laws, serving your citizens, making money, and taking a holiday. Here's how this chapter begins.

Running a country is a bit like having a pet fish. You have to take care of the fish or bad things will happen (to the fish). Actually, looking after a population is a lot more work than that because your citizens won't be satisfied with just food and clean water. They will expect big things, such as a justice system, a government and an economy, and smaller things, such as roads, schools and hospitals. These are the necessities that will help them lead healthy and prosperous lives. And if your citizens are healthy and prosperous, your country will be, too.

The last chapter, entitled "Meet the Neighbors," highlights the fact that we all live in "one big world, and sometimes we need to work together on issues like peace and global warming and disaster relief." What follows is an introduction to some of our neighbors (big and small, old and new, rich and poor, etc.), international organizations, and talk of keeping the peace.

While there is no bibliography at the end of the book, there is a helpful glossary and an extensive index. Remember how I said that the book covered a range of topics in social studies? Here alone is what you'll find if you explore the index listings for the letter R.
The writing in the book is engaging and often playful (jokes and puns abound), but always straightforward and clear. Topics are broken down into easily digestible chunks so that the text never gets overwhelming for readers. The cartoon illustrations are quirky, colorful and fun, adding to the playfulness of the text. (Take a look at these spreads from the book.)

Part of the CitizenKid collection (a collection of books that inform children about the world and inspire them to be better global citizens), How to Build Your Own Country will make a fine addition to school and classroom libraries. For teachers who want to help kids better understand issues related to government, this book will serve as a useful guide to setting up a micronation in the classroom. You can even download some helpful learning resource materials to help with this endeavor. Just don't say I didn't warn you if your class decides to annex the cafeteria and demands its users pay taxes!
Book: How To Build Your Own Country
Author: Valerie Wyatt
Illustrator: Fred Rix
Publisher: Kids Can Press
Publication Date: August, 2009
Pages: 40 pages
Grades: 3-6
ISBN: 978-1554533107
Source of Book: Review copy received from Raab Associates.
This post was written for Nonfiction Monday. Hosting this week is Tina Nichols Coury at Tales from the Rushmore Kid. Do take some time to check out all the great posts highlighting nonfiction this week.
Posted by Tricia at 9:08 AM