Poetry in the Classroom - Evolution and Extinction

I wasn't sure what to call this post, but before the month winds down, I want to share a few books of nature poetry that are in some way related to Darwin and issues of evolution and extinction.

An Old Shell: Poems of the Galapagos, written by Tony Johnston and illustrated by Tom Pohrt, is a collection of 34 poems in which Johnston pays tribute to the wonder that is the Galapagos. I'll begin at the end of the book and share an excerpt from the author's note.

After reading about them for a lifetime, in 1995 I visited the Galapagos. When you stand in this place, wild and vast and stark, looking out over the endless and shining skin of the sea, you hear the flutter and roar of Creation, feel the stir of your own beginnings upon the delicate chain of life. Here, you are at the core of the mystery and poetry of Nature.

These islands symbolize the peril that the entire earth faces. We can take it apart, sea turtle by sea turtle, shell by shell, but we cannot put it back together.

Meanwhile, as we struggle with our humanity, the sun bakes their old backs, the wind caresses the salt grass, the waves wash the Galapagos.

The book opens with a two-page map of the islands. The poem topics include the sea, the islands, animals, plants, and more. Here is one of my favorites.

At night the lava cactus blooms
In small white flowers. Its faint perfume
Floats upon the quiet dark
Along the lava still and stark
Where lone owl, old cold shadow, glides
While rice rat hugs the dark and hides.
When dawn comes up and darkness goes
Silently the petals close.
No one sees them in the gloom,
Small white flowers to please the moon. 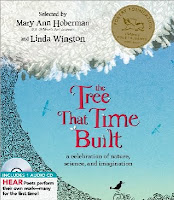 The Tree That Time Built: A Celebration of Nature, Science, and Imagination, with poems selected by Mary Ann Hoberman and Linda Winston, is a stunning collection of poetry and information. The book includes a CD where many of the selected poets read their own works. Included among the authors are William Blake, Joseph Bruchac, Emily Dickinson, T. S Eliot, Barbara Juster Esbensen, Douglas Florian, Robert Frost, Langston Hughes, D. H. Lawrence, Myra Cohn Livingston, David, McCord, Eve Merriam, Lilian Moore, Ogden Nash, Mary Oliver, Carl Sandburg, Alice Schertle, Joyce Sidman, Walt Whitman, and Valerie Worth, and many more. Here's a bit from the introduction that will give you a sense of how this anthology was put together.

Like Darwin, anthologists are passionate collectors, but the specimens we collect are poems. However, the process of collection in both areas is similar. At first, we simply gathered together as many poems as we could find that fit the subject we have chosen for your book. Then we decided how the book would be organized and we sorted our poems into the various categories we had chosen. The next step was putting the poems into some sort of order within these divisions so that they related thematically to their immediate neighbors.
. . .
The poems in this book explore many of the roots and limbs of Darwin's Tree, the branching tree that shows the connections among all forms of life. For some of these poems, we have offered brief comments or pointed out links to other poems.

The books is divided into the sections named below. For each one you'll find a brief excerpt or description of the kinds of poems in that section.
Here is one of the poems. Can you guess which section it is found in?

The fickle bee believes it’s he
Who profits from the flower;
But as he drinks, the flower thinks
She has him in her power.

Her nectar is the reason
That she blooms, the bee is sure;
But flower knows her nectar
Is there merely for allure.

And as he leaves, the bee believes
He”ll sample someone new;
But flower knows that where he goes,
Her pollen’s going, too.

Footnotes accompany many of the poems. These include explications of both the content and form of the poem. There is also a glossary of scientific and poetic terms, as well as a brief biography of the included poets.

Swan Song: Poems of Extinction, written by J. Patrick Lewis and illustrated by Christopher Wormell, is a collection of 20 poems that pay tribute to species that have disappeared since crossing paths with humankind. The book opens with these disturbing words.

More than ninety-nine percent of all species that have ever lived are now extinct.
. . .
On Earth, six animal species die every hour, many of the most recent due to climate change, habitat destruction, or human greed, carelessness or indifference.

A timeline runs across the bottom of the pages, with the poems ordered by when a species became extinct. You'll also find its scientific name and where it once lived. The first poem is to the aurochs, a species from which modern cattle descended that died out c. 1627. The last poem is to Miss Waldron's red Colobus monkey, a species that died out in 2000. In between you'll find familiar and unfamiliar animals, like the dodo and the blue buck.

Description: Loner; nightfall eyes;
Coat of spots on spots (disguise);
Once the New World's largest cat;
Mountain, grassland habitat;
Fed on any kind of meat;
Stumbled down a one-way street;
Color of a jealous sun.
Status: Nowhere. Future: None.

The book concludes with a series of endnotes describing each animal in further detail.

Here are a few sites with more information about these topics.
Do you have a favorite book of poetry that addresses issues of evolution and extinction? If so, please share. I'd love to add your ideas to this post.
Posted by Tricia at 9:20 PM