Poetry in the Classroom - Life in the Sea

My son's favorite poetry book is littered with post-it notes. He has marked the pages of poems he likes to read over, and over, and over. This makes me very happy. I was forced to steal said book this morning so that I could write this post! 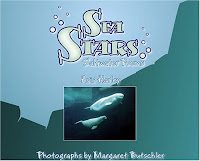 Sea Stars: Saltwater Poems, written by Avis Harley with photographs by Margaret Butschler, is a collection of 27 poems inspired by photographs of sea creatures. Here's a bit about the the poems from the Introduction.

It is unusual for me, as a poet, to have the illustration already created before the poem is written. Most often, it's the other way around. But Margaret Butschler's evocative photographs were an invitation to give life to those silent sea images. I loved the fun and challenge of choosing poetic forms to complement the different aquatic animals.

Harley did indeed use a variety of poetic forms in writing about otters, crabs, sharks, beluga whales, starfish, a seahorse, sea turtle, clown fish, pipefish, lionfish, sea cucumber, and more. Here are two that my son has marked as favorites. (I happen to agree!)

See how the flow of elbow and angle
smoothly moves in a tasteful tangle.

Think how this creature can gracefully scroll
down through the tiniest, narrowest hole.

And imagine the pageant with eight arms at play
when they bow at the end of their octo-ballet.

A toe-pinching scrimmage
has damaged my image.

But I ask you not to forget how well
I scuttle about in my stalwart shell.
Look at these hinges, these delicate claws,
my eyes on their stilts -- how they swivel and pause.

And see how I star in the oceans of night:
A Shining Crab Nebula -- old as the light.

The book closes with a section entitled Looking Deeper. Thumbnail photographs from each poem are included with the name of the animal and a bit of information. Here's the information provided about the subject of the Moon Sequins poems, the giant Pacific octopus.

Largest of all the octopuses in the world, the giant Pacific octopus can reach 24 feet (7.3 meters) from arm tip to arm tip. The many suckers on every arm can feel and taste for prey. The only hard part of the octopus is its beak. An octopus can squeeze through an opening just slightly larger than its beak.

At the Sea Floor Café: Odd Ocean Critter Poems, written by Leslie Bulion and illustrated by Leslie Evans, was just released on April 1st, 2011! I am already crazy about this one and can't wait to share it with my students. Bulion's collection contains 18 poems, a helpful glossary of scientific terms, poetry notes that describe the form of the poems, and suggestions for additional resources. Did I mention that Bulion has a graduate degree in oceanography? Poetry and science--a perfect pair--that are nicely matched in this collection.

I know I've already included an octopus poem, but please allow me this second indulgence.

This octopus walks backwards on two arms,
And wraps the other six around its top.
It ambles free of predatory harms,
And thus avoids become shark-chewed slop.

It winds six tentacles around its top,
Pretending to be flotsam sharks ignore,
And treads away from trouble, flippy flop,
Instead of being chomped to guts and gore--

A coconut that strolls across the ocean floor.

The poems in this collection are accompanied by factual information. Here's the text about the coconut octopus.

The coconut octopus wraps six of its arms around its head and walks backwards on its other two arms. This movement makes the octopus look like a coconut drifting across the shallow sea floor near Indonesia. Predators hunting for an eight-tentacled snack pass on by. 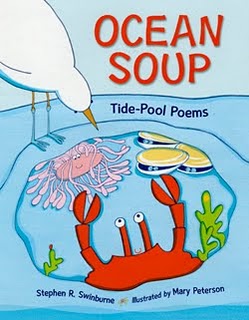 Ocean Soup – Tide Pool Poems, written by Stephen Swinburne and illustrated by Mary Peterson, was released in the spring of 2010. I was fortunate enough to interview Stephen last year and he spoke extensively about the creation of the book. It's a fascinating story. The book has a companion website that includes a number of videos, an online glossary, reading list, and links to related web sites. The videos are funny, creative and incredibly entertaining. Take a look.

Ocean Soup - Bully of the Tide from Steve Swinburne on Vimeo.

Much like Bulion's book, this title also pairs short nonfiction bits with the poems. Here's the text that accompanies "The Bully of the Tide."

Lobsters are eating machines. They crush food with their heavy front claw and chop it up with their smaller one. Lobsters will eat everything from seaweed to clams to crabs to mussels to worms to urchins to fish--they'll eat them dead or alive. Lobsters even munch on other lobsters..

So, there you have it, three of my favorite poetry books about ocean animals. If you want to extend your study of ocean life, here are a few additional resources you may find useful.
Do you have some favorite ocean poetry or sites? Please share! I'd love to hear your ideas.
Posted by Tricia at 12:29 PM